Home › Culture › How Was a Viking Chieftain Armed? The Gjermundbu Discovery Reveals the Answer

How Was a Viking Chieftain Armed? The Gjermundbu Discovery Reveals the Answer

Based on the findings in the Gjermundbu I grave dating back to the years 950 – 970 AD, this is how a Viking chieftain was armed. (Illustration from the book “Vikings at War”, 2011)

In March 1943, a unique finding was made on the Gjermundbu farm in the Haugsbygd village in Ringerike, Eastern Norway. One of the graves discovered inside a twenty-five meters long burial mound confirms what most of us suspected: Viking chieftains were armed to the teeth.

The mound contained two graves dated to the years 950 – 975 AD with the burnt remains of two males and a large number of different objects, including remains of weapons, armor and helmet.

One of the graves, the Gjermundbu I grave, contained what scientists have reasons to believe was a chieftain together with almost a complete set of combat equipment. The rare finding has made it possible to reconstruct the closest we come to a fully armed Viking chieftain.

There were, among many other objects, found parts of a helmet and a chainmail, a beautiful Type S sword, two spears, two battle axes, four shield bosses, two riding spores and five or six horse bits.

The Gjermundbu helmet is still the only one found in Scandinavia dating back to the Viking Age. (Photo: Museum of Cultural History, Oslo)

The Type S swords were imported and in use from about the year 900 to 950, normally richly decorated. Some had inscription on the blade, a so-called Ulfberht inscription, a Frankish personal name that became the basis of a trademark of sorts, normally made by master blacksmiths in the Frankish areas.

The Gjermundbu I helmet is still the most complete and only Viking age helmet discovered in Scandinavia, today assembled and restored from the nine parts found in the grave.

Waiting to be Discovered

The Gjermundsbu II grave in the same burial mound is not as richly equipped as the Gjermundbu I, and contained a double-edged Type M sword, battle ax and a spearhead.

The Type M swords were mostly in use from about 850 to the start of the 900s. It was the most common of the Viking Age swords and almost never decorated.

It is natural to assume that the two graves are parts of a family grave, maybe containing father and son. 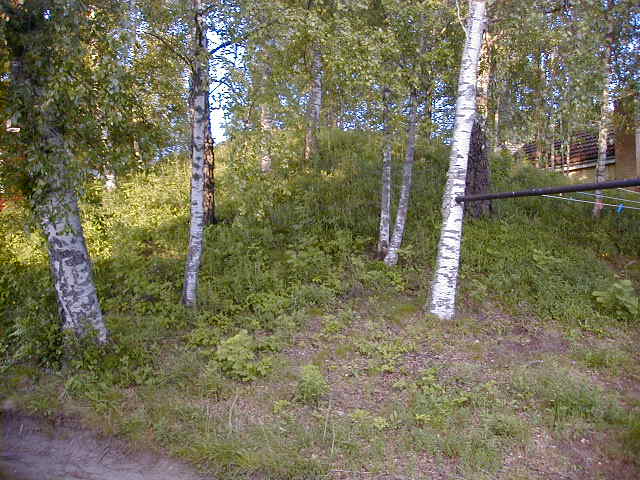 The second burial mound on Gjermundbu has not yet been excavated. (Photo: T. Bjørnstad)

There is another and even larger burial mound on the Gjermundbu farm that has not yet been excavated.

Sometime in the future, we will hopefully get the answer to what it hides: Maybe another Viking Chieftain with a complete and even more impressive combat equipment – or something quite unexpected?

Like Loading...
‹ Vikings Filled Their Pillows and Duvets with Eagle-Owls’ Feathers
Get Into the Spirit of Christmas with Old Norwegian Christmas Cards ›