The about 100 foot long Myklebust ship is Norway’s largest Viking ship find.  It was burned with king Audbjørn of the Fjords and his earthly goods around the year 870 AD. Now the ship is being rebuilt and it will be the main attraction of a brand new Viking center.

In 2019, the Sagastad Science and Experience Center opens in Nordfjordeid in Western Norway. The main attraction will be the about 100 foot (30 meters) long and 20 foot (6.5 meters) wide Myklebust Viking ship.

Right now, it is being reconstructed by experienced boat builders down by the fjord in Norfjordeid – right beside the location for the new center. Did you know that it is possible for visitors to watch the ship as it grows?

The fascinating and informative text below is from Sagastad’s homepage:

The large Norwegian ship graves from the Viking age are unique in the global context. The Myklebust ship from Nordfjordeid on the west Norwegian coast is the largest Viking ship that has been found traces of in Norway, with a length of more than a 100 foot.

Comparison with the Gokstad and Oseberg ships. (Illustration: Sagastad/ Arkikon.no)

The Myklebust ship was excavated from “Rundehågjen” on the Myklebust farm in Nordfjordeid in 1874, several years before Gokstad (1880) and Oseberg (1904). The Myklebust ship differs from the Oseberg and Gokstad ships because the grave was cremated. The ship burning custom was typical for the west Norwegian coast in the 6th and 7th century. The Myklebust grave is both the last and the largest cremation grave we know from the Viking Age.

The layer of coal in the grave can tell us something about the dimensions of the ship. The mound has a diameter of 100 feet and is 13 feet tall, there was also a wide moat all around the mound which was refilled in the 1800ds.

There is reason to believe that King Augbjørn of the Fjords is the man who was buried in the Myklebust grave. He was mentioned in the sagas, and died in the battle of Solskjel in the year of 876. This correlates well with the dating of the grave to the last half of the 800ds. 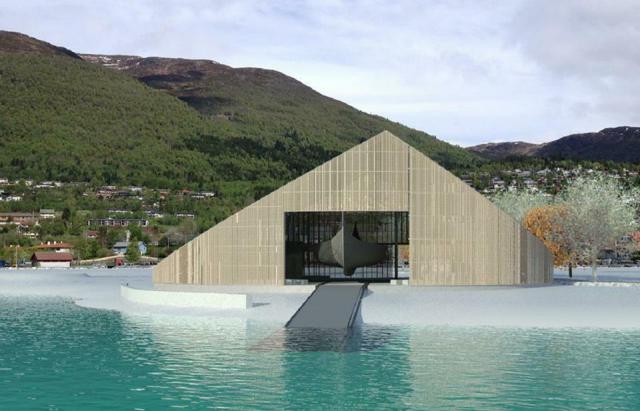 The Myklebust ship can be launched directly from Sagastad and sail on the Nordfjord. (Photo: Nordplan)

Experienced boat builders from Bjørkedalen in Volda municipality started the construction of the new ship in the fall of 2016, they are building it the way we believe the original could have looked.

The construction is being conducted in a hall by the fjord in Nordfjordeid – just beside the location for the Sagastad center, which will be ready for visitors in 2019, and just over 300 yards from the burial mound. The hall will have regular visiting hours during the build, so it is possible for visitors to watch the ship as it grows.

The Myklebust ship will be launched onto the fjord in 2019, and we will then be the first since King Audbjørn and his crew to sail on the fjord in Norway’s most glorious Viking ship.

The grave and the history

Rundehåjen, the mound where the Myklebust ship was found is only one of several burial mounds at the Myklebust farm in Nordfjordeid. Several of the mounds still exist, and collectively represent some of the most spectacular discoveries from the Viking Age in Norway.

In Rundehåjen there was found split rivets and shield bosses from the ship together with weapons, huge amounts of bones from animals and the bones from a man who must have been between 30-35 years old when he died.

There was also an enamelled bronze cauldron of Irish origin in the grave, decorated with three man figures. One of these figures has become known as the “Myklebust man”.

You can read the full article and watch “The Viking Burial” video here on Sagastad’s homepage.

Like Loading...
‹ Research: Vikings Did Not Hide Behind Shield Walls
Researchers Have No Idea What These Giant Gel Balls Are ›