Historians have interpreted this wood carving found on the northern wall of Urnes Stave Church to be a scene from the Bible although the motif obviously shows a familiar scene from Old Norse mythology (Photo: The Directorate for Cultural Heritage, Norway)

The year is 1020 AD and King Olaf Haraldsson introduces Christianity as the official religion of Norway, an extremely controversial act in large parts of the population: Why should the Old Norse belief be abolished, the belief that had brought success and prosperity for hundreds of years? Why should the Norse gods, places of worship and religious leaders be replaced by an unknown god worshiped in Catholic churches?

The Christianisation of Norway had already started years before King Haakon “the Good” Adalsteinfostre (reign about 935-960 AD) returned from England as a Christian. During his stay he had been fostered by King Athelstan as part of an agreement made by his father King Harald Fairhair who wanted to protect his youngest son from dangers in Norway.

King Olaf Tryggvason (reign 995-1000 AD) also sought to convert pagan Vikings into the new belief, but it was Olaf Haraldsson (reign 1015-1028, later referred to as Olaf the Holy), who with sword and ax introduced Christianity as the official religion.

The main reason why the Christian kings wanted to introduce the new belief was that it legitimized the royal supremacy because the King was the supreme head of the Church. Christianity was a useful tool for defeating opposition from Viking earls and chieftains, and thereby weakening their power. 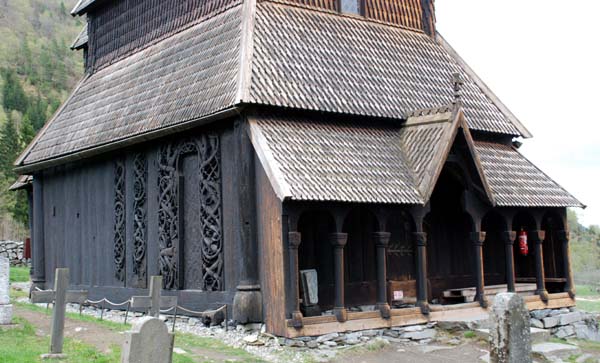 The Urnes Stave Church entrance brings us back to a bygone era. (Photo: Unknown)

And Olaf Haraldsson was in a great hurry: The self-appointed king was facing increasing skepticism and resistance among many in the Norse society, not least among the farmers in Trøndelag in Central Norway who were satisfied that important decisions and conflicts were democratically settled during the gatherings at the Frostating court.

An absolute monarchy was the last thing they wanted.

These were the same farmers who eventually defeated and killed King Olaf at the Battle of Stiklestad on 29 July in the year 1030.

How should Olaf effectively stop the Norsemen from worshipping the old gods and replace them with his Christian god and Catholic saints, something that would secure him unrestricted power?

The historians cannot say exactly when Christianity was introduced throughout Norway, but the sagas tell that “killings and blunt force” were the key tools of persuasion.

It is also logical that on the top of Olav Haraldsson’s agenda was removing all of the heathen hofs (Old Norse: hof, a hall, a sanctuary with a roof) that were the foremost symbol of Old Norse belief, and to kill or force religious leaders to convert.

From Heathen Hofs to Stave Churches

Only a few remains of heathen hofs are found in Norway and Scandinavia, and it may seem like historians and archaeologists are searching in all the wrong places for remains of the holy buildings representing an important part of Scandinavian cultural heritage.

One exception was in 2010 when it by chance was discovered something that possibly was an almost complete place of worship, located at Ranheim about ten kilometers north of Trondheim in Central Norway.

What is the reason why there are found almost no hofs in Norway when we know that there must have been hundreds?

Obviously many have disappeared over time, but it is strange that in addition to Ranheim only a few remains are discovered.

Could the main reason be that the majority of historians and archaeologists have overlooked the obvious and closed their eyes for the most logical explanation? Does not the answer fit into the Christian worldview where Olav the Holy, Norway’s patron saint, and the glorified myths surrounding his life are “untouchable”?

It is tempting to believe that researchers have chosen not to search for traces of Old Norse religion for the same reasons why the worship of Odin and Thor, with a few exceptions, are omitted from the Viking sagas: The sagas were written down after the introduction of Christianity and authors who wanted to print their texts glorified Christianity. They seemed to forget the fact that most Vikings were heathens.

It is obvious that many of the Norwegian stave churches originally were Old Norse places of worship even though many want to believe otherwise.

Reuse was both a quick and practical solution for Olav Haraldsson and the Viking kings who had started the Christianisation process before him: The Old Norse hofs were beautiful buildings that easily could be converted into churches. They were placed on strategic and visible points in the terrain, preferably alongside fjords and rivers where the people traveled.

Moreover, obtaining all the needed materials for new church buildings would be expensive and time consuming.

To remove Old Norse symbolism cut out of wood and stone, kill or force the priests (hofgoði) and priestesses (hofgyðja) to convert, and then make the old hofs into church buildings, could be carried out in just a few days.

Furthermore, to burn down the old places of worship would be tactically unwise because the heathens then would have a holy place to return to.

The Norse Hof at Urnes

Of about 1500 medieval stave churches in Norway, twenty eight still exist. One of the clearest evidences that old hofs were converted into churches is the Urnes Stave Church beautifully located on the south side of the Lustrafjord in Sogn og Fjordane County, Western Norway.

The church is officially dated to around the year 1140 AD, meaning about eighty years after the end of the Viking Age, but the dating is uncertain.

Since Urnes Stave Church probably consists of elements from several periods and there is used a large amount of recycled materials, it has been difficult to determine the history of the building. 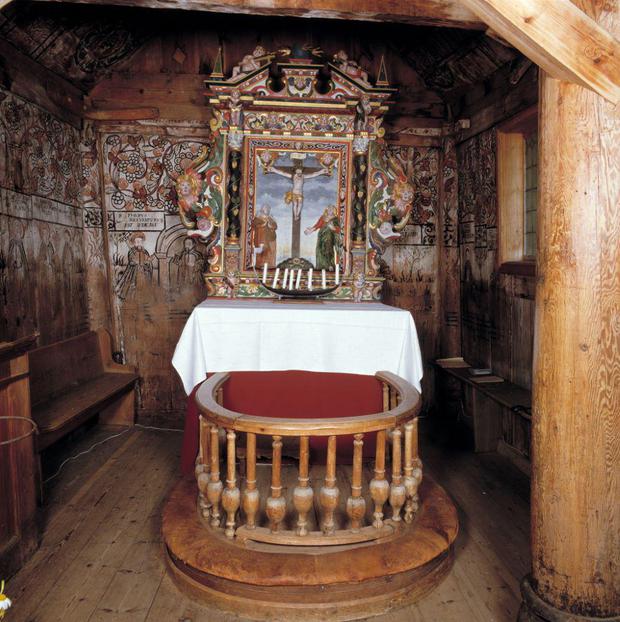 Dendrochronology, or tree-ring dating shows that the oldest dated log in Urnes Stave Church started to grow in the year 765. It also showed that parts of the church, including the northern wall with wood carvings, consisted of reused materials from an older building.

This illustrates that it is very likely that the original buildings were constructed long before the Christianity of Norway.

Although Christianity became the official religion in the year 1020 AD, it is very likely that people living in remote places like Urnes converted much later.

The wood carvings found on the northern wall (see top photo) is also a witness of another age and belief: This is clearly not a scene from the Bible, but from Ragnarök (Old Norse: Ragnarǫkr, “the End of the Gods”), showing the Nidhöggr serpent eating the roots of Yggdrasil, an enormous mythical tree connecting the nine worlds in Norse cosmology.