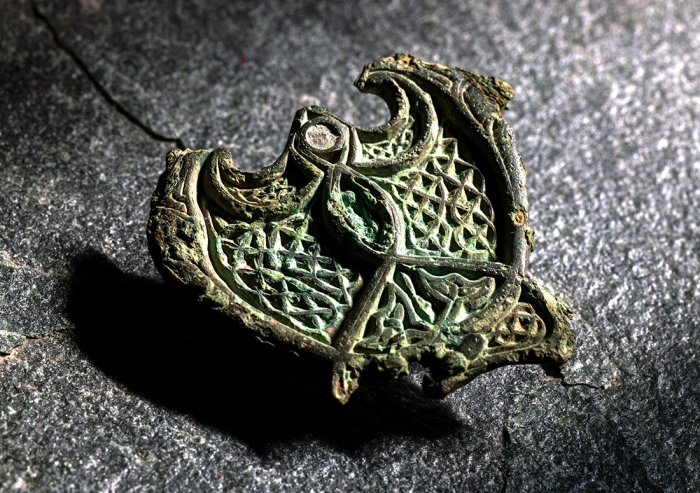 In the summer of 2016, this Celtic ornamental horse harness fitting was found in a Viking woman’s grave on the Agdenes farm at the mouth of the Trondheimsfjord (Photo: Åge Hojem / NTNU Museum of Natural History and Archaeology)

When a Viking woman died in the 800s in Trøndelag, Central Norway, she took with her a special status symbol into the grave: A beautiful brooch made of gilded bronze, originally a Celtic horse harness fitting looted by Norsemen raiding the British Isles.

The brooch was discovered with a metal detector in a field on the Agdenes farm located by the mouth of the Trondheimsfjord. It is in good condition, and depicts something what could be a bird with dolphins or fish on both “wings”, science portal Gemini.no writes.

The ornaments suggests that it is of Celtic origin, probably made in Ireland in the 700s or 800s AD. The brooch was originally a horse harness fitting made of gilded bronze, but a hole at the bottom and remains of a needle on the back shows that it was used as a decorative brooch.

Almost all of this type of metal fittings found in Norway have been discovered in women’s graves dating back to the 800s, i.e. the beginning of the Viking Age. 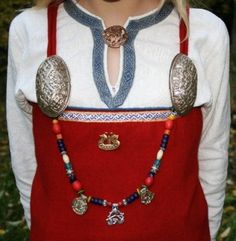 “Exotic” ornamented metal fittings produced in the British Isles were popular among Vikings joining the first plundering raids. The fittings could originally have been a part of a decorated horse harness, or ecclesiastical objects such as Bibles, crosiers and shrines.

They were often presents to female family members and used as jewelry and brooches showing that the woman was married to, or a relative of a successful Viking. Moreover, the foreign ornamented metal fittings stood out from “ordinary” Norse jewelry and traditional bowl-shaped brooches.

The National Museum of Denmark writes on their homepage:

The Viking woman typically wore a strap dress with an undergarment or smock underneath.

The strap dress was a close-fitting dress, made of coarse material, which was sewn together. It was either open or sewn together at the sides. In addition, gussets could be sewn into the dress to give it shape. The strap dress fitted over the chest and was held up by a strap on each shoulder.  The strap was fastened at the front with a shell-shaped brooch. Between the two brooches, there was often a string of beads.

The Agdenes farm is strategically located at the tip of the Trondheimsfjord, and the place is mentioned several times in the Norse kings’ sagas as a gathering place for Viking longships.

From the Trondheimsfjord, the Vikings sailed further south along the Norwegian coastline before heading to the west and the tempting riches on the British Isles.