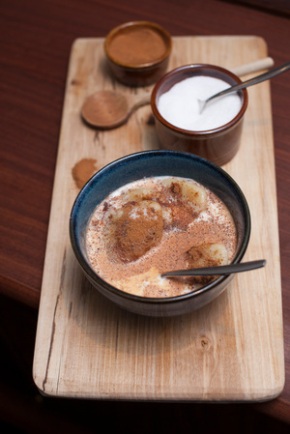 Kleppmelk (klepp milk) is a soup commonly used in the Trøndelag region and in Northern Norway. It consists of thick pancake batter formed into bowls simmered in milk.

It is reasonable to believe that the dish is very old since the word klepp stems from Old Norse kleppr meaning pile, a naked rock or a large stone.

However, Klepp has many definitions, including a hand tool shaped like a fishhook on a shaft (fishing gaff), a municipality in Rogaland County, and Kleppr is a Norse boy´s name.

Mix eggs and sugar with 2.1 cups (5 deciliters) milk. Blend in the flour until it becomes a firm dough. You can use only wheat flour, but it is recommended to replace 1/4 of the flour with barley.

Mix salt and the rest of the milk. Bring to boiling point. (Pay close attention when you heat the milk – it may bubble over)

Using a tablespoon, make small bowls out of the dough, and place them in the hot milk. Let them simmer for about 10 minutes.

Serve with sugar and cinnamon and a glass of cold (!) milk.

Like Loading...
‹ Almanac for 1644 – The First Book Printed in Norway
A Magic Mountain Hike for the Future ›