Home › Culture › An Information Sign from the Stone Age

This “information sign” may have been carved out at the waterfront to share important information with other Stone Age hunters. (Photo / Model: Erik Kjellman, Tromsø Museum – The Arctic University Museum)

In August 2015, there was discovered a unique group of petroglyphs nearby Kirkenes town in the far northeastern part of Norway. The engraved drawings were located right down at the waterfront. One theory is that they have served as an information sign for other Stone Age hunters.

Up until now, there have been discovered forty-eight rock carvings dating back to the years 5200-4200 BC. The drawings stand out from others found in Northern Norway and show that the place was an important intersection between the river, the fjord and the Barents Sea for people who lived this far north and used boats as their main method of transportation.

The place is strategically located halfway inside the fjord nearby Kirkenes in Finnmark county. The carvings show reindeer and moose, alone and together, with and without calves.

Normally, rock engravings showing animals are pointing in all directions. Here however, most reindeer have noses pointing in the same direction.

Anja Roth Niemi, Head of the archaeological excavations at the Arctic University of Norway, believes the drawings show where the animals were located and how they moved in the area – vital messages from a hunter to another.

– In the autumn, reindeer with calves are moving from the coast to inland areas. It may also have been like this in the Stone Age, says Niemi to research portal Forskning.no.

The central location made the rock carvings visible from several directions. The sea level was higher 7,000 years ago, and when the hunters came by boat, it was almost inevitable not to spot the drawings at the waterfront.

The drawings are similar to those found in Alta, a UNESCO World Heritage Site, but in Alta there are depictions of both boats, bear, fish and hunting scenes.

The selection of motifs are remarkably little varied, and were probably made on purpose. Remains of bones from the many Stone Age settlements in the area suggest that residents of the coastal areas hunted reindeer. In the inland, moose were important for survival. 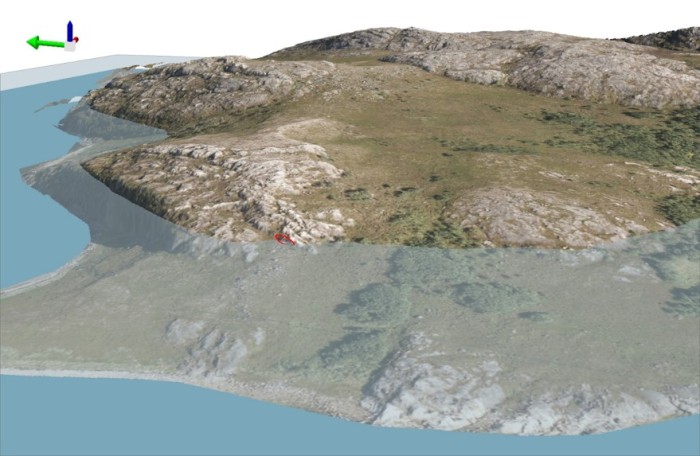 The map shows the height of the sea level when the petroglyphs were carved into the rock. (Model: Erik Kjellman, Tromsø Museum – The Arctic University Museum)

It was a laborious process to carve out all of these animals, and the location supports the theory that they were placed deliberately.

However, were these people willing to share valuable hunting secrets with competitors?

– I believe it is just as likely that this was information to their own group, a transfer of knowledge to later generations, says Niemi to Forskning.no.

Today we can thank our ancestors’ creativity and willingness to share vital knowledge with others – something that has resulted in many new generations, including you and me.