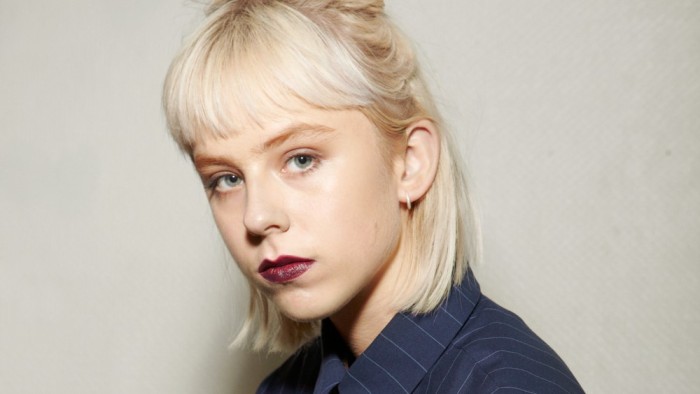 Editor Elise By Olsen is referred to as a rising star, and her magazine was recently named the top five best magazines in the world by the site Highsnobiety. (Photo: Birgit Solhaug / NRK)

Elise By Olsen is 16 years old and editor of Recens, world leading among alternative magazines. Her greatest task is to deal with her own generation.

– I think my generation is tired of constantly being exposed to the same type of bodies, with an industry that plays on our “faults”. Recens Paper is a reaction to glossy magazines and bloggers who constantly focuses on beauty standards and gender stereotypes, she tells NRK.

She is an example of Generation Z, born after 1990, who grew up in a digital era. In Latin, Recens means fresh, similar to By Olsen when she started the magazine at age 13.

– I had a blog for five years, with some friends from the Internet. Recens was a further development of the blog, a magazine created by and for young people, she says.

Printed publications is something that has always fascinated her. For her, the choice to develop a magazine was easy.

– There is nothing better than to smell, feel and study a paper magazine. I will oppose the predicted “paper death”.

Having financed the first edition with their own savings, her friends left the magazine, and Elise was left alone.

The second edition sold out, and today, over 2,000 copies are distributed worldwide. Editors in commercial fashion magazines supports By Olsen and see her as an independent voice. They call her magazine unpolished, raw, stripped-down and anti-commercial.

More than two hundred young people from different continents contribute to the magazine. Meetings are conducted through Skype, or common group messages on Facebook.

According to By Olsen, Recens is more than just a fashion magazine; they also write about art, music and politics.

– It is important that we look at relevant subjects, not only related to Norway, things that appeal to most people.

Recens is a gender-neutral magazine, for both boys and girls, and everything in between. By Olsen wants the magazine to show a wide diversity, not only one size and one type of body, as the rest of the fashion industry.

– We often engage with “Street Casting” where we pick people off the street and bring them to our studio.

Elise By Olsen looks on clothing as art and a form of expression. The focus should not be on the model, as an object.

Her goal is that the magazine encourage young people to create something.

– The funny thing is that I am still not old enough to own your own company, so my mom take care of the financial, she laughs.

The days before launching a new edition are busy. She starts school at eight and go to the office right after class around one o’clock. With the release-party just around the corner, Elise By Olsen has a golden opportunity to finally meet several of her readers face to face.

The Norwegian Embassy in Paris has invited the sixteen-year-old editor to celebrate the Norwegian fashion industry during the next Paris Fashion Week.

– I am going to attend a few fashion shows, meet distribution agents and visit the stores where Recens is sold – and I will of course meet some of my Internet friends, she says.