Home › Culture › Bunad › Endangered Handicraft: Ingebjørg (85) Is The Only One Who Knows This Technique

Endangered Handicraft: Ingebjørg (85) Is The Only One Who Knows This Technique 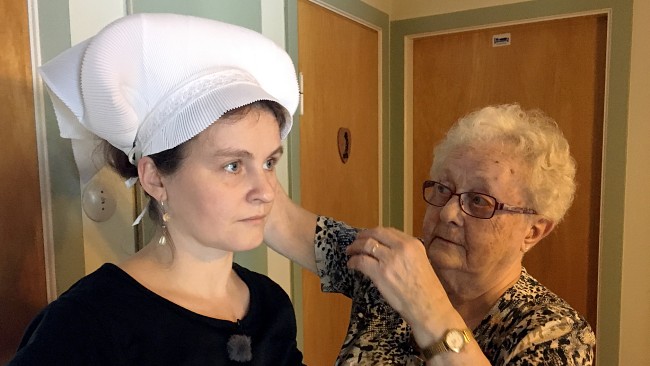 In solitude: Ingebjørg Byrkjeland (85) is as unique as the folding technique. (Photo: NRK)

Folding a Hardanger Bunad headscarf is an endangered craft, and Ingebjørg Byrkjeland (85) from Norheimsund, Western Norway, is the only one left in the world who knows the unique technique.

The headscarf is the icing on the cake on the Hardanger Bunad. However, the tradition will soon disappear if it does not recruit new skilled workers. As we speak, a strongly needed rescue mission have been implemented for the traditional handicraft to survive.

Ingebjørg Byrkjeland have been folding headscarves for over 50 years. She does not deny that the work requires a lot of precision and patience.

– It was an old woman, a neighbor, who asked me if I could teach myself how to fold headscarves, because she was so tired of it. I visited her once, but otherwise I am self-taught, Byrkjeland tells NRK.

In the beginning, it was a time consuming task. If everything done correctly, the headscarf will fold like the Folgefonna Glacier on top of the head.

Once the fabric has stiffened, it is time for the biggest task; Approximately 250 nearly microscopic pleats must be folded – a task that takes several hours.

The headscarf has been part of the Bunad tradition in Hardanger since the 1600s. Achieving perfect results is a very laborious process.

In Hardanger, primarily married women used headscarves, and it was considered indecent omitting the headscarf.

Now, Folgefonna Husflidslag, Hardanger Folk Museum, and Bu and Ringøy bygdekvinnelag have joined forces in a project to keep the unique craft alive. The goal is to ensure that the knowledge transfers into new hands.

After Ingebjørg’s recent retirement, she is certain that the new recruits will perform.

– They are so excited that I do not think they are going to give up. They are really handy, she says.

A collective term for national costumes from the various communities in Hardanger.

The Hardanger Bunad is one of Norway’s most traditional costumes, and it has developed from being a casual outfit into becoming a national costume.

There are slight variations among the Bunads. The female Bunad from Kvam has two varieties; One with a red vest and white apron, and the “snedadrakten” with a dark shirt and dark apron.

The belts are reserved for married women. In general, girls should not dress up as much as wives.

The female Bunad from Hardanger has been in continuous use from the 1600s until today.

Like Loading...
‹ New Viking Ship Museum in Oslo: This is the Jury’s Favorite
Unknown Sender “Made Their Day” ›