Home › Culture › New Viking Ship Museum in Oslo: This is the Jury’s Favorite

New Viking Ship Museum in Oslo: This is the Jury’s Favorite 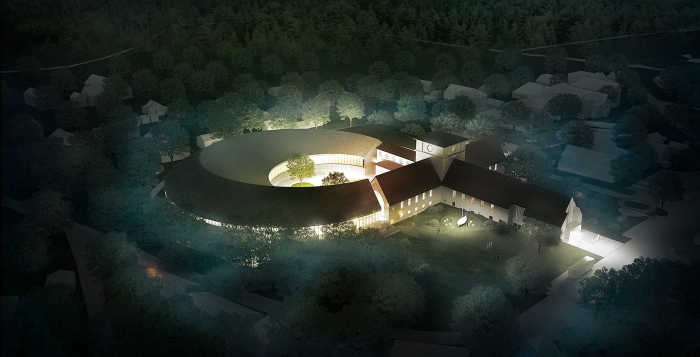 The Viking Ship Museum, located directly outside of Oslo city at Bygdøy, will undergo a long-needed expansion and modernization. Of 111 proposals from around the world, the jury has chosen its favorite: “Naust” (English: «Boathouse») by AART Architects.

This week, the Norwegian Minister of Education and Research Torbjørn Røe Isaksen, announced the jury shortlist:

The favorite is “Naust” by AART Architects from Aarhus, Denmark.

Number 2 is «Viktingtiden på ny» (English: “The Viking Age all over again”) by JAJA Architects from Copenhagen, Denmark, in cooperation with Coast Studio.

In addition, the jury has selected seventeen other proposals the jury will take a closer look into.

An international group of experts concluded that the historical Viking ships and artifacts at Bygdøy were too fragile to be moved, and in 2012 it was decided that ships should stay at the current location.

The three winning proposals have in common that they are taking into account the fragile Oseberg, Gokstad and Tune Viking ships, as well as the other irreplaceable objects, and that the new museum can be constructed without the use of explosives and major changes.

Still, all three ships will be moved into the new museum building so that they can be exhibited together with findings from their respective burial mound. In addition, the Norwegian Museum of Cultural History will be able to display more objects than today.

The Viking Ship Museum is one of Norway’s most visited museums, with about 400.000 visitors annually.

The existing museum building is protected by law, and one of the competition criteria is that the current museum will be an integral part of the new building.

Now the proposals will undergo quality control, and the construction startup will take place no earlier than 2020.

Like Loading...
‹ The “Thinking Bench” That Makes You Think
Endangered Handicraft: Ingebjørg (85) Is The Only One Who Knows This Technique ›