The Wolf Ring from Goa 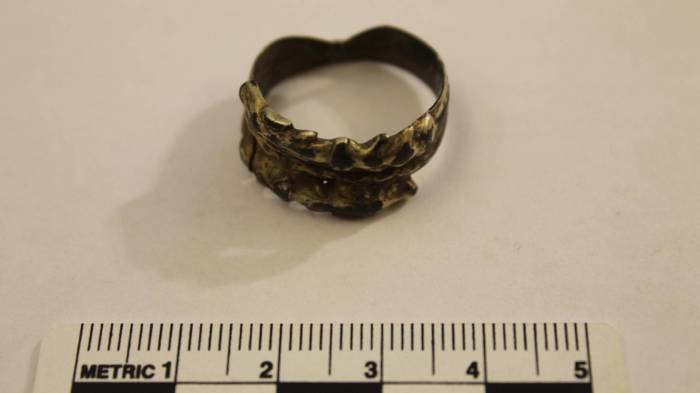 What did this ring with two wolf heads symbolize to the Viking who wore it? (Photo: Lars Søgaard Sørensen, Rogaland County Municipality)

In the autumn of 2015, a unique Viking Age spiral ring with two wolf heads was found in Goa in Randaberg, Western Norway.  Does the ring show Odin’s two wolves, Geri and Freki – or is it the Fenris Wolf, symbolizing Ragnarok and the end of the world?

Bjørn Tjelta, a member of Rygene Metal Detector Club, found the gilded silver ring in a field buried only 10 centimeters (4 in) down in the ground. It is dating back to the period from year 900 to 1000 AD, measuring about 23 millimeters (0.9 in) in diameter.

As many people today, the Vikings feared wolves because they represented a real threat to people and livestock, and the mythical beast has assumed a central role in Norse mythology.

Odin has several animals: a horse, two ravens, a pig and two wolves.

Odin’s eight-legged horse Sleipnir is the fastest of all horses, and it can run on land, on water, through the mountains and in the air.

On each shoulder, Odin has his two ravens, Huginn and Muninn (“Thought” and “Memory”). They can see every move down on earth and hear every sound. Nothing can be kept secret from Huginn and Muninn. 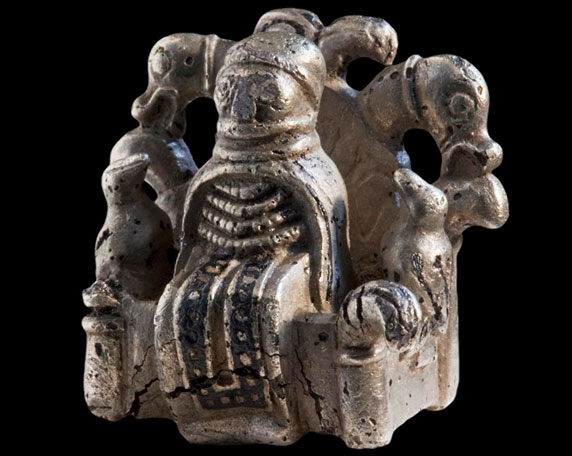 Silver figurine from Gammel Lejre: Odin on his high seat with his ravens and his wolves (Photo: National Museum of Denmark)

He also owns the pig Sæhrímnir providing food for all in Vallhalla. The pig is killed and eaten every night, and then resurrects the next day.

Odin’s two wolves, Geri (“Greedy”) and Freki (“Ferocious”) are according to Norse mythology lying at Odin’s feet and help him in war. If Odin is served food, he immediately sends it on to the wolves.

In 2009, there was discovered a silver figurine during the excavation of Old Lejre in Denmark. The figurine is dated to about the year 900 AD and shows Odin sitting on his high seat Hlidskjalf surrounded by his ravens Huginn and Muninn. The decoration on the throne’s back displays the wolves Geri and Freki.

Was it a Viking warrior who wore the ring from Goa displaying Odin’s two wolfs, and should the ring provide magical protection in battle?

In Norse mythology, Fenris (Old Norse: Fenrisúlfr or Fenrir) is a monster wolf, son of Loki and Angrboða, “the one who brings grief”. It has two siblings, Hel and the Midgard Serpent, and two half-siblings, Nari and Váli. 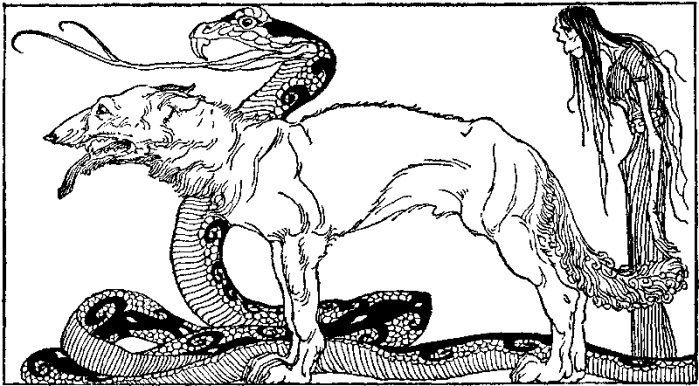 Angerboda’s and Loki’s offspring: The Fenris Wolf, the Midgard Serpent and Hel – all having a central role during the events of Ragnarok. (Illustration: Willy Pogany, 1920).

In both the Poetic Edda and Prose Edda, the Fenris Wolf kills Odin during the Ragnarok, but is in the end killed by Odin’s son, Víðarr.

Does the ring from Goa symbolize the Fenris Wolf and Ragnarok, and that that the end of the world is near?

The answer to the question has unfortunately disappeared together with one of history’s most fascinating cultures.