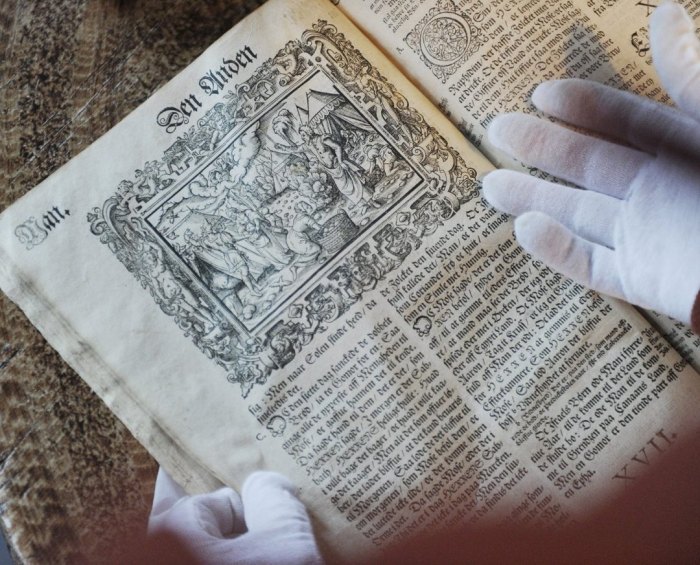 One of the two richly illustrated Bibles from 1589 weighs six kilograms. (Photo: Namdalsavisa)

The Namdal Museum in Namsos, Central Norway, has always known that they have had a very old Bible in their possession, but have not been able to locate it. Now the mystery is solved, and it was not just one, but two in almost impeccable condition.

– Fantastic! This is a real cultural treasure, says Geir Grøtan to Namdalsavisa newspaper about what best can be described as a perfect Christmas gift to the Museum.

A week ago, Hans Olav Barstad at the Danske Bank contacted Bjørnar Sellæg and Geir Grøtan at the Namdal Museum. He could tell that there were found two parcels in the inner bank vault labeled “Namdal Museum” and “Bible”.

It is likely that the two dusty packages have been stored in the vault since 1947 when it was constructed.

The Namdal Museum that was established in 1927, has always collected artifacts from the local area.

The two holy books are dating back to the year 1589 – and is Frederick II of Denmark and Norway’s Bible that is a revision of the 1550 edition, the first Danish-Norwegian Bible.

According to Sellæg, between 1500 and 2000 copies of this edition were printed. How many that still exists, is unknown.

– As you can see, these Bibles have many illustrations. Another difference between the two, compared with the newer ones, is that they are much larger and heavier. The largest weighs six kilograms (13.23 lbs), says Grøtan.

– We have a desire to restore the largest and most magnificent. Moreover, we want to display both here at the museum, he says.