Thousands of photographs – some new motifs and some of better quality than publicized images, documents and lectures. 80 years after the Norwegian state took over polar explorer Roald Amundsen’s home Uranienborg outside Oslo a very special chest has been discovered.

On November 22 earlier this year, director at Follo Museum, Henrik Smith found his way into a storage room inside the old house.

– As previous conservator-restorer, I am triggered to open all sealed boxes to see if they may contain objects of importance that require different storage conditions, says Henrik Smith to newspaper Aftenposten.

– At the back of the room, covered by documents and vinyl records, stands a chest. I clear my way to reach it, and to my amazement, the inscription says “Leon Amundsen, Kristiania, Norway. From Roald Amundsen, Nome, Alaska”.

Inside the chest, Smith finds thousands of photos – positives, negatives and glass slides. He also finds an envelope with the inscription “Northwest Passage, Photographs not used.” The discovery takes us 110 years back in time.

For 400 years, Englishmen tried to find a path from the North Atlantic Ocean to the Pacific Ocean, but Roald Amundsen was the first to sail across the Northwest Passage.

In 1903, he and his crew left Oslo on the ship “Gjøa”. The expedition would make their way through the Northwest Passage, but they would also make scientific researches on the North Magnetic Pole.

Amundsen was the first to prove that the North Magnetic Pole is dynamic. During two winter seasons, he also got plenty of time to study the Netsilik Inuit.

The expedition lasted until August 1906, when they finally reached Nome in Alaska where Amundsen shipped the particular chest back home to his older brother.

Roald Amundsen grew up in Uranienborgveien, next to the Royal Palace in Oslo (then called Kristiania). When he in 1908 bought a house in Oppegård, he called it Uranienborg. Here, he planned historical expeditions, and he lived here until his death in 1928.

Today, Uranienborg is a museum, and almost intact as it did when the explorer lived there. The Norwegian state acquired the property 80 years ago. The place is open to public, but difficult to access. Follo Museum and Henrik Smith wish to develop Uranienborg, but first every item inside the building must be registered. 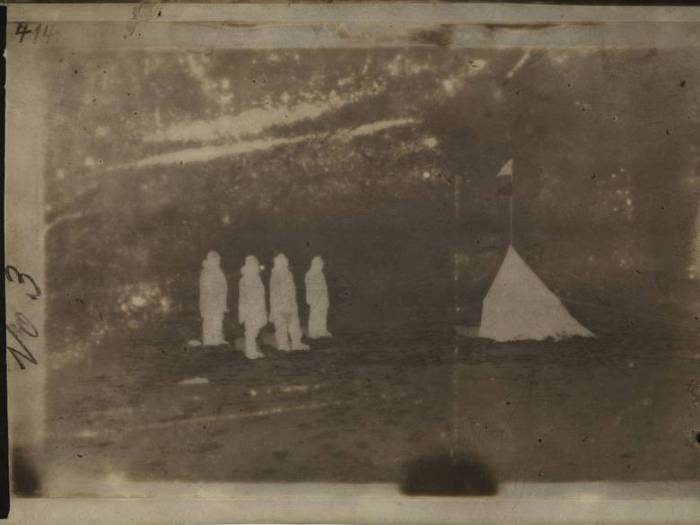 A copy of the original photo – and probably one step closer to the original – have been found inside the chest.

After the expedition through the Northwest Passage in 1906, Amundsen was eager to discover the Geographic North Pole.

Famous Norwegian explorer Fridtjof Nansen had already tried to reach it in an expedition lasting from 1893 to 1896, but he had to retreat just north of the 86 latitude. During the first part of the journey into the pack ice, Nansen used the specially designed ship “Fram”. It was this ship Amundsen would borrow for his attempt to reach the North Pole. However, it did not go exactly according to plan.

Two American polar explorers claimed, separately, to have reached the Geographic North Pole before Amundsen started. Robert Edwin Peary said he had reached the point on 6 April 1909. The other, Frederick Albert Cook, claimed to have been the first, already a year earlier, but that he had spent a very long time getting back to tell about it.

True or not, the stories got Roald Amundsen to reroute. Instead, he headed for the South Pole, and on 14 January 1911, “Fram” arrived Antarctica. Eleven months later, on 14 December, he reach the South Geographic Pole. On 8 March 1912, the world news was announced. 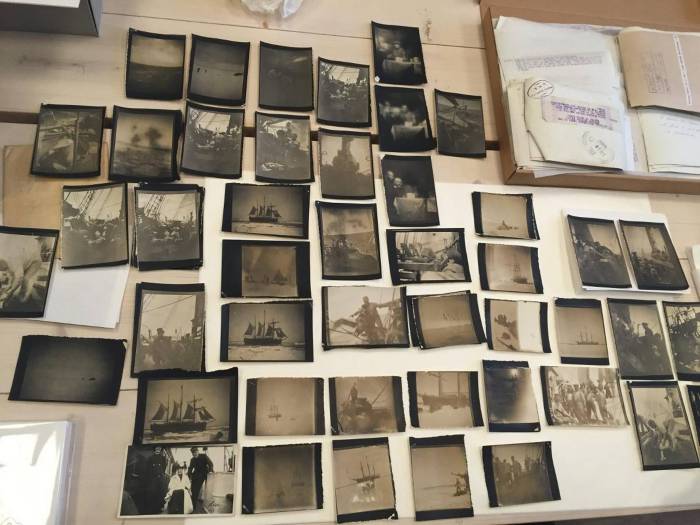 Remarkable finds: Some known and some unknown photos are to be registered and archived for the future. (Photo: Follo Museum)

Before Amundsen set sails with “Fram”, he received a very special visit onboard. The recent discovery contains a series of photos showing King Haakon and Queen Maud welcomed by Fridtjof Nansen, and Amundsen wishing them farewell. The event is thus also a kind of official ship handover from Nansen to Amundsen. This particular photo series consisted of 21 paper positives in ascending order and of good quality.

– The chest also contained many photos from the “Gjøa” expedition, which is inadequately documented. The finds complements archived material at the National Library of Norway, the Museum of Cultural History and the Fram Museum, says Smith.

Roald Amundsen died presumably on 18 June 1928, but the circumstances remain a mystery. What we do know is that on this day he departed from Tromsø in the plane “Latham”. His goal was to search for his former partner, Italian engineer Umberto Nobile.

Nobile had flown into the polar region with the airship “Italia”, but crashed on his way back to Ny Alesund on Svalbard. The accident led to a massive search and rescue, and Amundsen wanted to help – even if there had been conflicts between them.

A few hours after Amundsen and a crew of five took off from Tromsø, a collier near Svalbard received a distress signal. They may have come from Amundsen’s plane.

It is believed that bad weather caused the plane crash near Bear Island. Wreckage was found, but there were no trace of the crew of “Latham”.

Roald Amundsen left a large material of photographs, research results and documents. With the latest discovery at Uranienborg, additional material from the Northwest Passage, the South Pole and the Maud expedition through the Northeast Passage is brought back into daylight. A significant job of registration remains.

Like Loading...
‹ Did These Filed Teeth Belong to a Viking Elite Warrior?
Celebrate Christmas at Vesterheim – Norwegian-American Museum ›