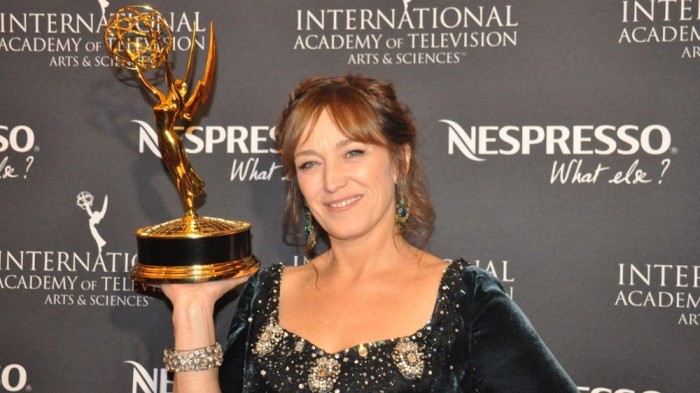 – I cannot think right now – I am just so happy! I have won, and that is very fun. I did not believe it, said an excited von der Lippe to NRK shortly after she received an Emmy in New York.

She received the award for Best Performance by an Actress for her role as police detective Helen Sikkeland in the popular NRK series “Eyewitness”.

That makes her the first Norwegian honored with an Emmy statuette, and the first Nordic actor to win this award.

– It is a recognition from another world. It is truly a milestone, said a very happy von der Lippe.

NRK correspondent in USA, Gro Holm, followed the actress during the Emmy awards and was present on the red carpet together with other international celebrities.

Holm says the actress has indicated that she is keen to do some acting jobs the U.S. – and perhaps the award can help her well on the way.

– Anneke von der Lippe is an established actress, but if she wants to do something abroad, as she indicated to me on Sunday, such an award is really important, says Holm.

Screenwriter and director Jarl Emsell Larsen created “Eyewitness” and said it was her empathic and credible elements that made him chose von der Lippe to play Sikkeland.

We send our warmest congratulations!

Like Loading...
‹ Norwegian Women Are Waiting Longer Than Ever To Become Mothers
Have Your Gingerbread House Exhibited in the National Museum ›