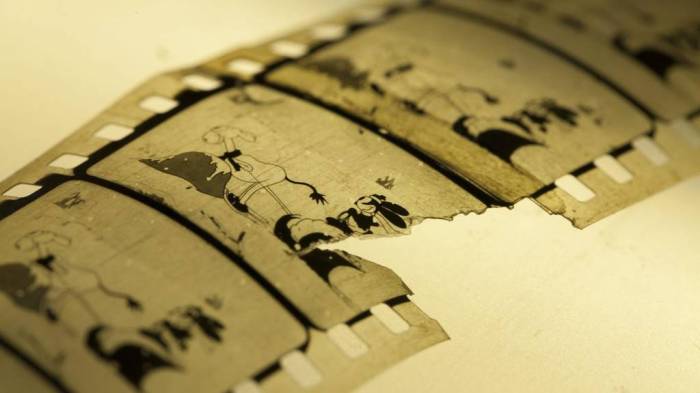 The 1927-Disney film “Empty Socks” was considered a lost film until it appeared in the collection of the National Library of Norway in 2014.

Through detective work by employees at the National Library and historian and author David Gerstein, the animated treasure was revealed.

– This is a film historical and sensational discovery, and we are proud to be part of bringing it back into the light, says film archivist Kjetil Kvale Sørenssen at the National Library to newspaper Aftenposten.

Until now, experts thought only 25 seconds was all that was left of the Walt Disney Christmas motion picture, presented on December 12, 1927. This short silent film clip has long been in the hands of the Museum of Modern Art (MOMA) in New York.

The version rediscovered in Norway was found on two unmarked nitrate film reels, and runs for five and a half minutes.

– Only 30 to 60 seconds in the middle of the film is missing, says Kvale Sørensen.

“Empty Socks” is about Oswald the Lucky Rabbit and his holiday celebration, created by Walt Disney and Ub Iwerks in 1927. They produced a series of 26 silent films with Oswald before Mickey Mouse was established the following year. The popular mouse eventually took over as one of the dominant characters in the Disney universe.

In 2007, the National Library received the responsibility to secure and archive all flammable and fragile nitrate films in Norway.

– We did not know the title of this animated film, but my colleague Tone Føreland wrote down a detailed description of the plot, says Kvale Sørenssen.

Føreland suspected that the character in the film was Felix the Cat, a figure developed by pioneer Otto Messmer in the early silent film period.

He suspected that the Norwegian collection could contain unknown Disney motion pictures. In 2007, he rediscovered another rare copy of Oswald the Lucky Rabbit, “Tall Timber” from 1928, in the archives of the Norwegian Film Institute.

Gerstein was disappointed when he went through the list of movie titles, but became curious when he came across the description of the film Tone Føreland had registered.

– Based on the plot he could immediately determine that it was the lost “Empty Socks”, says Kvale Sørenssen.

The National Library has restored the film and made digital copies, one of which sent to enthusiastic archivists in the Walt Disney Company in the United States.

The original copy is located in the National Library’s own archive of nitrate film – a specially constructed bunker in Mo i Rana next to the National Archive.

– The film reels are so flammable that they cannot be stored together with the other historical archive material. The bunker has controlled humidity and temperature, and divided into different cells with fireproof partitions, Kvale Sørensen explains.

The restored film was presented to the public at the National Library in Oslo accompanied by live piano music.