The “Friendship Bench” Shall Reduce Loneliness

The “Join-in-bench” aka friendship bench at Berg primary school in Trondheim. “If you need anyone to play with – sit down!” (Photo: Morten Andreasen / NRK)

A “friendship bench” can be an important initiative to reduce loneliness in Norwegian schools.

– If you do not have anyone to play with, you can sit on the bench so that others can come and ask if you want to join them, says eight-year-old Emil Midelfart to NRK.

He is in the student council at Berg primary school in Trondheim, and tells about the new school project: The “Join-in-bench”. These benches, also called friendship benches, are placed in several school playgrounds around Norway.

Here, children can find someone to play with, new friends, or simply be less lonely. The concept is originally American.

One day, Emil sat down on the bench after being left out from playing with classmates.

– Eventually, a friend of mine named William came over. He sat down and asked if I wanted to come play with him, says Emil.

Teacher Maren Vaagland is responsible for the friendship bench at Berg primary school. 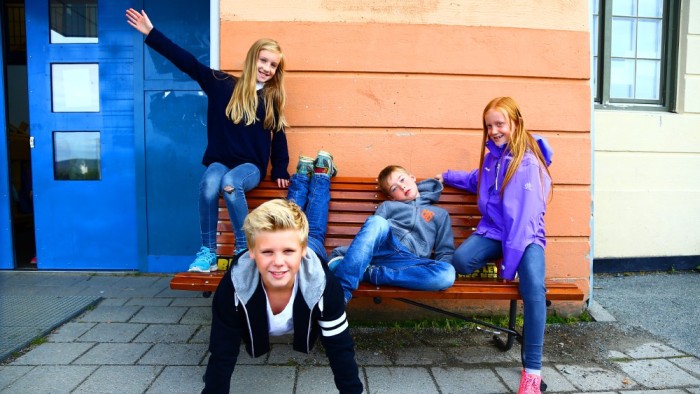 – Even social kids who have lots to play with, but who would like to find someone else to play with, may sit down. Thankfully, kids who are often left out also sit here, says Vaagland.

To make sure that the concept works, teachers and students have to keep an open dialogue in the classrooms. The rules are simple:

– If you do not have someone to play with, you sit down on the bench. Everyone in the schoolyard has a responsibility to keep an eye on the bench, she explains.

In other Norwegian schools, the friendship bench has been welcomed with open arms. The pupils are very clear that the bench is not a place to “hang out”.

However, the friendship bench itself is not an action against bullying. It is part of a larger project where teachers and students must work together.

The experiences at Berg primary school in Trondheim is so far positive.