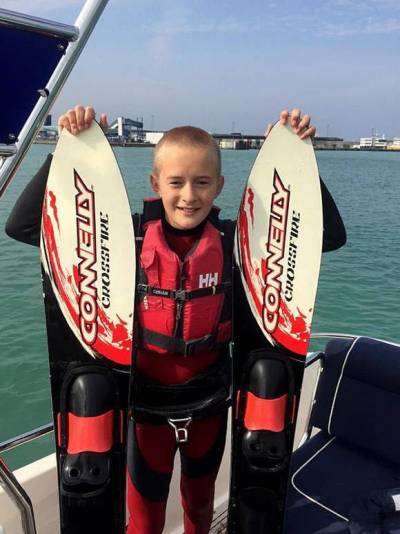 On an early Sunday morning in July, Henrik Wahlstrøm (13) left the family cabin in Tvedestrand on his water skies. Three and a half hours later, he arrived in Hirtshals in Denmark.

– After one hour, my legs started to hurt. I wanted to give up several times, says Henrik Wahlstrøm to local newspaper Fædrelandsvennen.

Back at the family cabin in Tvedestrand, the water skiing enthusiast enjoys his summer holiday. He is happy to tell that his biggest dream has come true: Water skiing from Norway to Denmark.

– I heard about an adult who had done it last year, however with two or three breaks. Since then, I have dreamed of doing the same, says the thirteen-year-old, who has spent nearly all his summer vacations practicing at the family cabin.

With dad Einar behind the helm of the family boat, mum Anne watching him and a bottle of water, Henrik set out at six-thirty a.m.

– It was a bit rocky at the start and at the end, but the middle of the strait was completely still – which was great. Skiing on waves is very hard, says Henrik.

Even though the pain in his legs started to get intense, the thirteen-year-old continued.

– Gradually, we began to see more and more boats. First, I saw some birds, and then I saw mainland. It felt wonderful, he says.

– I am very impressed and proud. When we got halfway I knew he would make it, but I was afraid he would fall at the end, says Anne.

As they approached mainland, they performed a lap of honor along the coast of Hirtshals before they disembarked.

– My legs were incredibly stiff and I could barely walk. However, it was great fun, says Henrik.