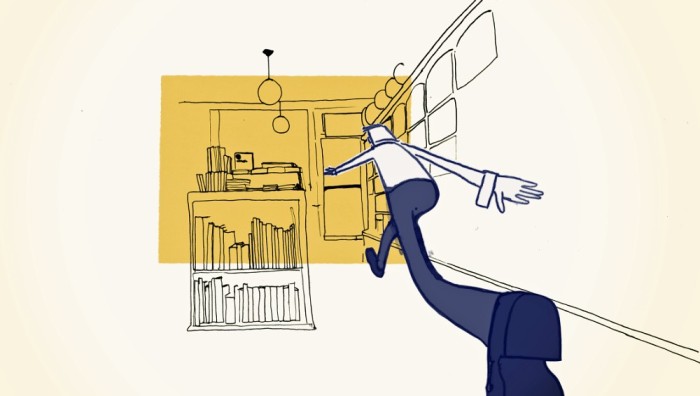 In the film, the main character “R” is a bookworm living in his own world. (Photo: Mikrofilm)

The Academy Award-winning Norwegian animation studio Mikrofilm is producing an animation film based on Paul Auster’s “The Red Notebook.” The American writer has given the Norwegian film director Kajsa Næss permission to use the story for free, and soon the film “It Was Mine” will be ready.

Auster is married to the Norwegian American author Siri Hustvedt and has been in Norway on numerous occasions. In 2002, Kajsa Næss met the author in Oslo when he was giving a lecture at the Norwegian Film Institute (NFI).

– I knew Aster was going to visit Cinemateket (Editor’s note: The cinema at NFI), so I made a little package of drawings, an animation test and a letter. Then I waited for him. When he got out of the taxi I gave him the package. A few weeks later, I got a nice fax telling that I was given permission to use his story – for free, says Næss to NRK.

The director fell for Auster’s stories about life coincidences that he writes about in “The Red Notebook.”

The film depicts a strange and surprising encounter between two people. It is about a man searching for a book, which he cannot find. Then he meets a girl who is standing reading it. It ends with him getting the book from her.

Producer Tonje Skar Reiersen tells NRK that Auster has seen drawings along the way and just said “go for it”.

– He has said that he is looking forward to watching the film and is glad it has been made, says Reiersen.

– It would be great to watch it on a movie screen in New York. We produce it in 4K resolution, to make it look good on the big screen, and with good sound. We would rather that Auster watch it in this way, in the cinema during a festival, than only on a data file, says the producer.

Now, Mikrofilm hopes for a premiere at one of the major international festivals, like the French Annecy or American Palm Springs and Tribeca in New York, where Kajsa Næss frequently has been participating with her films.