Malala Held One of History’s Most Important Nobel Speeches 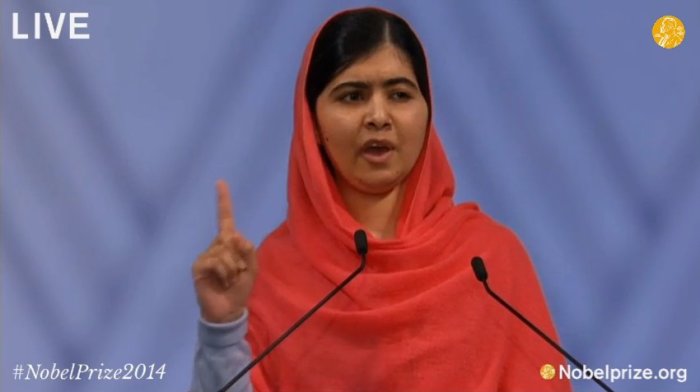 Malala Yousafzai (17) from Pakistan held an historic speech when she accepted the Nobel Peace Prize in Oslo after becoming a symbol of the fight for children’s and girls’ right to education.

– I am here to stand up for their rights, to raise their voice, she said. It is not time to pity them. It is time to take action, so it becomes the last time that we see a child deprived of education.

Malala became the youngest Nobel Peace Prize laureate in history, and her words shows her wisdom despite only being 17 years of age.

During her speech she also asked the rhetorical questions: “Why is it that countries that we call strong are so powerful in creating wars, but are so weak in bringing peace? (…) Why is it that giving guns is so easy, but giving books is so hard?”

From a young age, she made a name for herself in her region as someone who was unafraid to criticize the Taliban. She has been especially critical of terrorist attempts to prevent young girls from getting an education.

During her Nobel speech in Oslo, she commented on her attempted assassination by a Taliban gunman in 2012. She was just 14 years old when the terrorist boarded her bus, pointed a pistol at her head, and pulled the trigger in an attempt to silence her.

– I had two options — one was to remain silent and wait to be killed, she said. – And the second was to speak up and then be killed. I chose the second one. I decided to speak up.

Luckily, she made a full recovery after the shooting.

You can listen to Malala Yousafzai’s full Nobel speech here:

Like Loading...
‹ Record Number of Births After the Storm “Hilde”
The Joy of a Real Christmas Tree ›