This bronze key from Heggum farm in Røyken in the Oslofjord is dated to the Viking Age. (Photo: Eirik Irgens Johnsen, Oldsakssamlingen)

It is found a large number of keys from the Viking Age (c. 800-1066 AD) both in female graves and as individual findings. Bronze keys were used as a status symbol by women and were often small works of art worn on a belt around the waist.

The key from Heggum farm (Old Norse: Heggheimar) is 9.5 centimeters long and ornamented with intertwined animal figures. It was found in a burial mound and may have belonged to a powerful housewife. The day she got married, she got the keys to the farm doors and treasure chests as a visible sign of her position and power.

Replica: A push key padlock from the Viking Age was found on the Björkö island in Lake Mälaren, Sweden. (Photo: historicallocks.com)

A Viking woman’s responsibility was “inside the doorstep,” the man’s outside. Her work duties were housekeeping and making food, including drying and smoking fish and meat, working wool, spinning yarn and sewing and weaving for the family’s own consumption.

Pregnancy, breastfeeding and upbringing of the children also took up time in a woman’s life. In practice it was probably the women who looked after the elderly.

She also had to perform heavy work like carrying water and participate in haymaking. In addition she should have knowledge of herbs to make medicine for the sick and wounded.

When the man went hunting, fishing, on Viking raids or got sick, the wife had responsibility for the operation of the whole farm which in wealthy families also included many trells (slaves).

The married woman was seen to belong to the family she had grown up with and for that reason never quite became an integral part of her husband’s family.

If a marriage did not work out, both wife and husband could demand divorce. The Icelandic sagas describe a wide range of divorce laws which testifies a quite advanced law system. 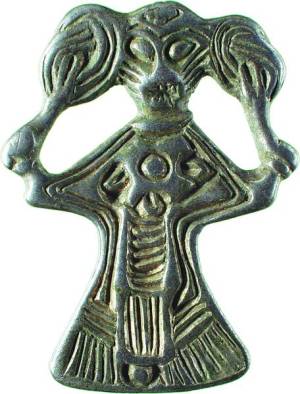 Silver figure of a woman, perhaps the goddess Frigg or Freya, found at the Tissø lake, Denmark. (Photo: National Museum of Denmark)

The woman could, for example, demand a divorce if the husband had settled in a new country, or had not gone to bed with her in three years. The most common causes of divorce were that her husband failed to provide for the household or was violent. If he had beaten his woman three times, she could leave him.

To carry out the act, she had to summon witnesses and proclaim herself divorced – first at the front door and later at the couple’s bed.

We do not know the divorce rate in the Viking Age, but the right to divorce, property and inheritance shows that women had an independent legal status. Usually infants and small children followed their mother, while the older children were divided between the parents’ families dependent on wealth and status.

The Viking women’s rights lapsed with the introduction of Christianity.