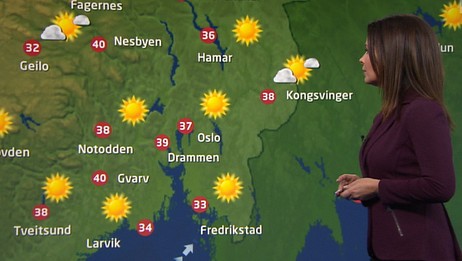 Hot: Meteorologist Bente Wahl reports a disturbing forecast. Traditionally, the Norwegian winter temperatures is below zero degrees Celsius, but in the year 2050, Eastern Norway may get temperatures as high as 40 degrees.

– In Eastern Norway, you can mow the lawn until Christmas. In Western Norway, people must evacuate, said meteorologist Bente Wahl in a very disturbing weather forecast.

In a new video, Wahl present the Norwegian December weather thirty-six years into the future. The forecast is alarming: Hurricane and extremely heavy rain in Western Norway, avalanche in the north and worrying high temperatures in the east.

This is how the well-known weather forecaster communicates the ongoing climate change.

– We want to show people how the weather can become in the future. There is no new information in the film, it is just presented in a different way, says Wahl who is hoping to put climate on the agenda.

Right now, there are major challenges in Norway with flooding in the west and generally high temperatures.

The Norwegian Meteorological Institute has long been a reluctant participant in the climate debate, but through the 2050 forecast, they finally speak.

Climate scientist Hans Olav Hygen and Rasmus Benestad have prepared the figures in connection with the recent IPCC report.

Like Loading...
‹ Is This Naughty Norse Runes or Runic ABC?
The Norwegian Mother and Child Cohort Study: One of the Largest Health Studies in the World ›