The Vikings Sacrificed to the Gods in Rivers and Lakes

This magnificent English sword was sacrificed in Skåne in Sweden. Today it is on display at the Historical Museum in Stockholm. (Photo: Department of Archaeology, Conservation and History / University of Oslo)

A doctoral dissertation from 2009 shows that the Vikings sacrificed valuable and beautiful objects to the Norse gods and their forefathers at bridges and fords because they believed they were the boundary between the living and the deceased.

The thesis by Julie Lund, Lecturer at the Department of Archaeology, Conservation and History at the University of Oslo – offers an insight into sacrificial customs of the Viking Age lasting from year 793 – 1066 AD.

Previously it was believed that this type of sacrifices came to an end in the Migration Period around year 500, but it turns out that the tradition continued into the Viking Age.

The Vikings used special places in the landscape for these rituals. Bridges and fords were particularly important because they served as a boundary between the living and the deceased. Viking settlements and burial sites were almost always close to water or connected by a bridge.

Lund examined the findings from about thirty sacrificial sites in Scandinavia, from the River Thames in Southern England and the River Shannon in Ireland. Places that came under Scandinavian influence in the Viking Age. Many of the sacrifices or ritual closures took place at bridges. 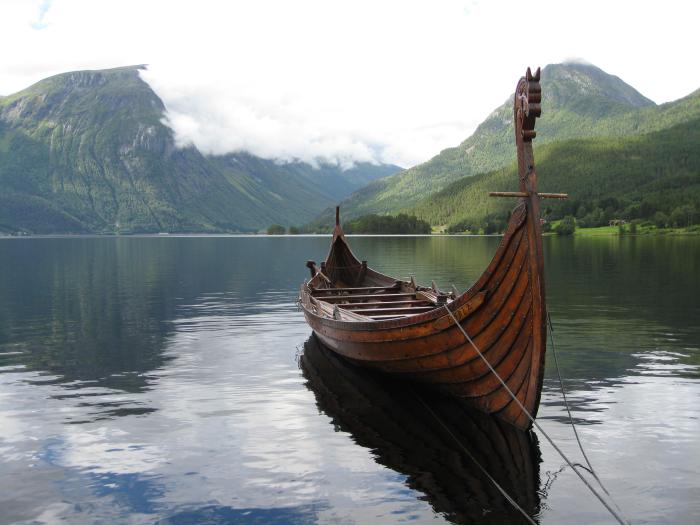 Fjords, rivers and lakes were essential for Viking expansion and trade – and could mean the difference between life and death. (Photo: Bente Engeseth / Municipality of Volda)

Many of the sacrificial sites were named after Norse gods, such as Tissø in Denmark, i.e. Tyr’s lake – the god of war and the one who decided who won battles.

An important discovery is that these special places often are highlighted in Norse sources as central to how people perceived the world.

Some of the most valuable and most beautifully decorated weapons with silver and gold inlays, as well as the finest jewelry with gemstones, were sacrificed.

According to Norse sources, some of the items had names and may have belonged to deceased persons. Much suggests that several individual findings that have been interpreted to originate from graves, originate from offerings in rivers and lakes.

In Ireland, a mixture of Norse and local artifacts were sacrificed, something that shows how two different cultures were intertwined.

Like Loading...
‹ University Wins the Nobel Prize in Medicine – Drops in the Times Rankings
How Many Polar Bears Are There in Svalbard? ›