This farmer in the Hjørundfjord in Western Norway is one of many who drive a John Deere or a Massey Ferguson. (Photo: Stig-Petter Rekkedal)

Maybe it is the dream about a big farm in the US Corn Belt that makes Norwegian farmers squeezed in between narrow fjords and high mountains to buy American tractors? So far this year it is sold 2,224 tractors and more than 60 percent are manufactured in the U.S. Massey Ferguson and John Deere are the most popular brands.

It is an understatement to say that it is harder to run a farm in Norway than in the Midwest: It is cold, steep and impassable – and the fields are the size of football fields. Altogether 112,000 farms have been abandoned since 1970: The number of active farms has decreased from 155,000 in 1969 to 43,525 in 2013. In the same period, farmland and food production have increased.

There is registered about 93,000 tractors in Norway, which means an average of 2.1 tractors per farmer. A large proportion is ”Made in the USA” by the agricultural equipment manufacturer AGCO Corporation, based in Georgia. Three of their core brands, Massey Ferguson, Valtra and Fendt, are all among the six best-selling brands. 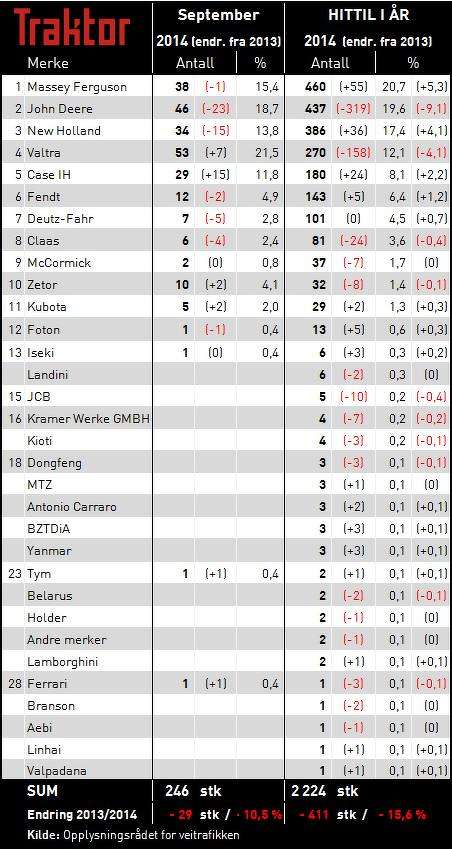 The table shows the number of tractors sold in September and so far in 2014. The numbers in parentheses show changes from 2013.(Table by: traktor.no)

Increasingly fewer active farms and farmers are compensated through modernization of operating equipment – including reliable tractors that can withstand the Norwegian Arctic climate.

The figures below illustrate the process of restructuring and rationalization the agricultural sector has undergone since the late 1960s to the present day:

The sector employs about 47,000 FTEs. Today, every Norwegian farmer produces twice as much milk, meat, grains and vegetables as at the beginning of the 1990s.