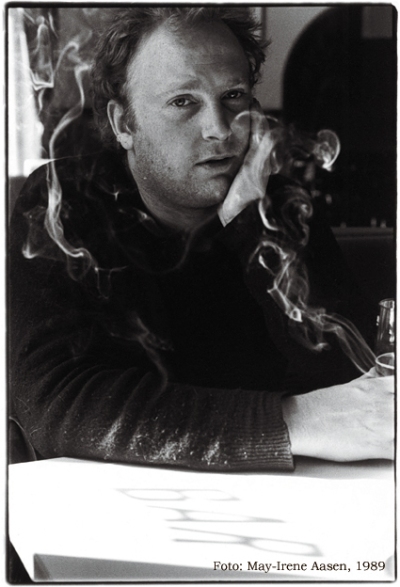 Today, Joachim “Jokke” Nielsen, Norway’s biggest rock poet, would have turned 50 years old. Commentator in newspaper Aftenposten, Joacim Lund, has written a most honest tribute to one of Norway’s most unconventional and unpredictable poets and musicians. Happy birthday, Jokke!

Aftenposten: Finally, Jokke got on stage. It was him we were waiting for. I do not remember the other bands who played, only the fiery political appeals between their songs. Seething anger against politicians, moneymakers and apparently a completely outrageous culture budget. Rock against the Budget, I think the posters said. It might have been in 1989. Spikersuppa [in Oslo] was the place.

– I should probably say something smart about the budget, he said.

– But I won’t. What I can say is that we’ve got a case of beer for playing here. One-two-three-four!

And then it started. He sang about beer and love. The two things I was most concerned about at age 16. We jumped around in front of the stage. Poured beer on each other. Singing the lyrics we knew. They were about us, or someone we wanted to be, maybe.

The next ten years, Jokke’s music became mandatory at all parties. Along the way I realized that the lyrics were more artistic than “nonsense”. I saw him live a few times too. But the truth is, I thought less and less about him. At least before he died.

I remember exactly where I was on 17 October 2000. I sat in a white, old Peugeot, in Voldsløkka neighborhood in Oslo, heading towards the city. “The artist Joachim Nielsen is dead”, they announced on the radio. Found in an apartment in Sandaker. Oh my God.

I knew he had drug problems, of course. But this. I got an insanely bad taste in my mouth. We drove him there, I thought. All of us who applauded his abuse. Who tied him to his role. That drove him to the edge.

“The many hundreds of his concerts created the myth of a stage personality that never managed to rub off the stamp “drunk man on stage”. Joachim Nielsen became the anti-hero who, by virtue of his position as Jokke in Jokke & Valentinerne, could light a fire among young boys in particular who used his songs as a cover to get drunk”.

I recognize myself. Jokke used to sing about that, even in the song Suksess:

“I have everything I need, I get it for free

And just because of a single song

I get drunk for free every damn time. “

If I Were You

It was not only we, who were young and thirsty for love, booze and rock ‘n’ roll, who used Jokke as an excuse for getting drunk. He did it as well. The time his manager Haavard Hansteen wanted to dissolve Jokke & Valentinerne, it was to release Joachim from Jokke, from the role he used as an excuse to get drunk and high – because we expected it.

When the album “Alt kan repeteres” was released in 1994, newspaper Bergens Tidende wrote that Jokke’s career as a beer-drunk circus clown was over, and more than hinted that he would be remembered as a self-effacing circus animal. That is not how it turned out. Today, on his 50th anniversary, Joachim Nielsen is remembered as the great Norwegian rock poet. He wrote his life, with seriousness and humor, without pretending anything.

At times, he was brutally honest. Both the lyrics and the way he communicated them. He told stories about a dirty and shady side of Oslo few had taken the trouble to write about. An exotic small universe with large, universal themes, written with a subtle hand. That is why they hit us so hard. And still does.

Everything Can Be Fixed

Nearly 15 years after his death, Jokke still reaches out to new groups. His stories have been told hundreds of times from the National Theatre in Oslo in the performance “Verdiløse menn”, to an astonishing variety of audiences in National Theater context from old ladies with blue hair to 16-year olds in search of beer and love.

He has gone from loser to winner, from anti-hero to super hero, from an outsider and into the national heritage.

That, my friends, is worth proposing a toast in the occasion of the 50th anniversary. No fancy stuff, that is. I kjøleskapet hjemme er det øl (In the fridge at home there is beer).

One of the most famous stories about Jokke was when Jokke was drinking beer at a local pub in Oslo and Michael Krohn, lead singer of Raga Rockers, comes in. He gets very excited when he sees that Jokke is drinking, thinking he might get his money back.

Krohn requests settlement, but gets an empty look from Jokke, who is very drunk. Finally, Krohn gets angry and gives a lecture about moral, money and honor:

“A man who drinks beer before he has paid his debts, is a man without honor”, he says, and points an accusing finger at Jokke.

“And you, Jokke, are a man without honor.”

“And you,” replies Jokke, and raises an eyebrow: “… Are a man without beer.”

On September 8, Joachim “Jokke” Nielsen would have turned 50 years old. The street poet died of an overdose of heroin on 17 October 2000. It is no secret that Jokke loved beer, and Schous Micro Brewery in Oslo have brewed 6000 liters of “Jokke Jubileumspilsner” beer to celebrate him.