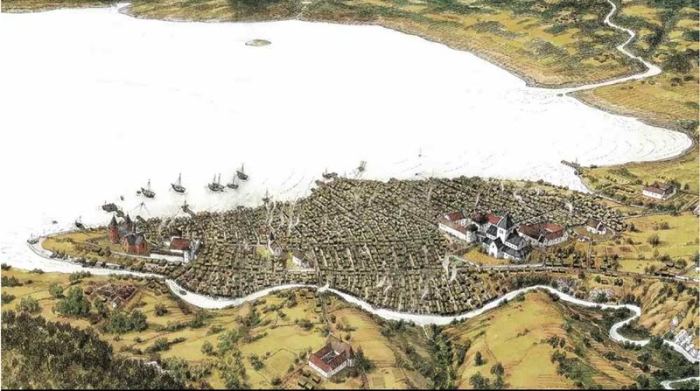 From this: Oslo in the 1300’s. (Illustration by Karl Fredrik Keller)

On 31 August 1314 AD, King Haakon V decided in a decree that the dean of St. Mary’s Church should “forever” be national chancellor. With this decision 700 years ago, Oslo became headquarters for the Norwegian national administration – as it has been ever since.

Haakon V performed his royal duties in a Christian perspective. He gave orders to make accommodations for pilgrims on their way to Nidaros, and he never forgot to regulate the working people’s wages. He stimulated the mission work through large donations to the churches and he built St. Mary’s Church in Oslo. Haakon V had great knowledge about European politics, and through his wife he had contact with the cultural and intellectual life in Europe.

It is said that Oslo was in grief ​​when he died and that several miracles happened at his funeral. There was even a shrine inside the St. Mary’s Church in Haakon V’s honor which until the 16th century was sacred.

The remains of Haakon and Eufemia were found during archaeological excavations in St. Mary’s Church in the late 1960s. In 1982, their bodies were transferred to the Royal Mausoleum at Akershus Castle.

Throughout 2014, the Oslo Medieval society will contribute to the commemoration of the 700th anniversary, which is also the main attraction for the Medieval Week (Middelalderuka) 2014 under the heading “Oslo During Haakon V’s Time”.

The Medieval Week takes place between 25 and 29 August, while on Saturday 30 and Sunday 31 August, Oslo Municipality arranges a large-scale celebration of the capital. 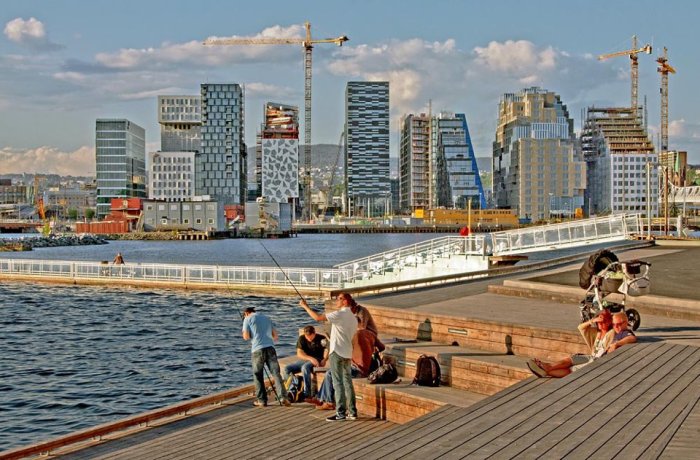 What does “Oslo” mean?

In modern Norwegian, Oslo could be named God (sacred) Grove.

The first syllable “os” is the same as “ás” in Old Norse, meaning “God”.

The second syllable “lo” probably derives from the Old Norse “lund” (Eng.: grove) which is related to the Latin “Lucus”. Ergo, God Grove.

It might have been an ancient cult place located in the medieval parts of Oslo. Below the ruins of St. Mary’s Church and the St. Clemet’s Church there are found remains from very old times.