This article published yesterday on worldnewsdailyreport.com, a self-described “satirical” website, is shared by tens of thousands on Facebook as “real news”. The article is entertaining and enjoyable reading, and may have happened? There is still very much we do not know about the Vikings and their lives. 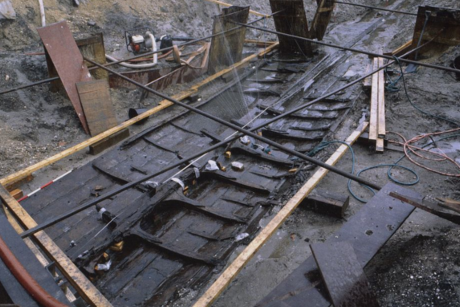 Memphis| A group of volunteers cleaning up the shores of the Mississippi river near the biggest city in Tennessee, have stumbled upon the remains of an ancient boat encrusted in mud. A team of archaeologists from the University of Memphis that was rapidly called to the site, confirmed that the ship is most certainly a Viking knarr, suggesting the Norse would have pushed their exploration of America a lot further than historians previously thought.

The heavily damaged ship was found near the confluence of the Wolf and Mississippi rivers, and lies on a private property. It has a length of about 16 meters, a beam of 4.5 meters, and a hull that is estimated capable of carrying up to 24 to 28 tons, a typical size for this type of ship. Knarrs were naval vessels that were built by the Norsemen from Scandinavia and Iceland for Atlantic voyages, but also used  for trade, commerce, exploration, and warfare during an era known as the Viking Age, that goes approximately from 793 to 1066 AD. They were clinker built, which means the overlapping of planks riveted together. It was capable of sailing 75 miles (121 km) in one day and held a crew of about 20 to 30 men.

One of the only artifacts on the site, this sword was probably abandoned after it broke, suggesting a violent battle. (Photo: Somebody Else Than worldnewsdailyreport.com)

This new discovery could be one of the oldest evidence of pre-Columbian trans-oceanic contact, and it certainly brings to mind the famous colony of ”Vinland” mentioned in the Icelandic Sagas. This mythical colony would have been established by Leif Ericson around the same period as the settlement at l’Anse aux Meadows, in the Canadian province of Newfoundland and Labrador, the most famous site of a Norse or Viking settlement in North America outside Greenland

Butternuts found in the Newfoundland site had already suggested that the Norse had explored the continent because they do not grow naturally north of the Canadian province of New Brunswick, hundreds of kilometers away from any known Viking settlement.

The carbon dating of the new ship estimates that it dates from between 990 and 1050 AD, approximately the period associated with Vinland and the various Canadian sites (L’Anse aux Meadows, Tantfield Valley, Avayalik Islands). This could mean that the Vikings had actually developed a far wider trade network in the Americas that what was traditionally believed. Unfortunately, very few other artifacts have yet been found on the site, suggesting the crew must have most likely abandoned the ship and continued on foot.

More searches are to be expected in the area over the next few years, as scientists will now certainly try to look for any artifacts or historical traces that could lead them to understand what happened to the crew of the ship. Many myths from local native tribes will also be analyzed by historians from the team to see if they could hold useful information, as both Chickasaw and Choctaw mythologies include many stories of fights against “red-haired devils”.

Like Loading...
‹ A Taste of Cultural History Draws to a Close
Diaper Smuggling From Norway is Big Business ›