“Halfdan carved these runes” on a parapet in Hagia Sophia is a testament to the Vikings’ mobility and vast trading network, and that there are many parts of their history we still do not have knowledge about. (Photo: Egil / Wikimedia Commons)

Two runic inscriptions are found in the Byzantine church of Hagia Sophia. They are believed to be carved by Vikings in Constantinople (modern-day Istanbul) during the 9th century AD, long before the Varangian Guard – an elite Viking unit of the Byzantine Army – was first formed under Emperor Basil II in 988 AD. Who were the Vikings leaving evidence of their visit?

In 1964, the first runic inscription was discovered on a parapet on the top floor of the southern gallery. Only parts of the first name Halfdan is legible as -alftan. “NN carved these runes” was very common in Viking Age runic inscriptions, and it is possible that the inscription in Hagia Sophia followed this template.

In 1975, a second inscription was discovered in a niche in the western part of the same gallery as the first. Experts on runes have interpreted the inscription as Árni, i.e. Arne, as a simple signature or tag.

Hagia Sophia – Center of the World

The population of the Byzantine Empire is estimated to have been seven million in year 780 AD. The imperial capital of Constantinople, named Miklagard by the Vikings, had about 2 – 300.000 inhabitants.  The city was an important trading center where the east met the west by crossing the Bosphorus Strait. 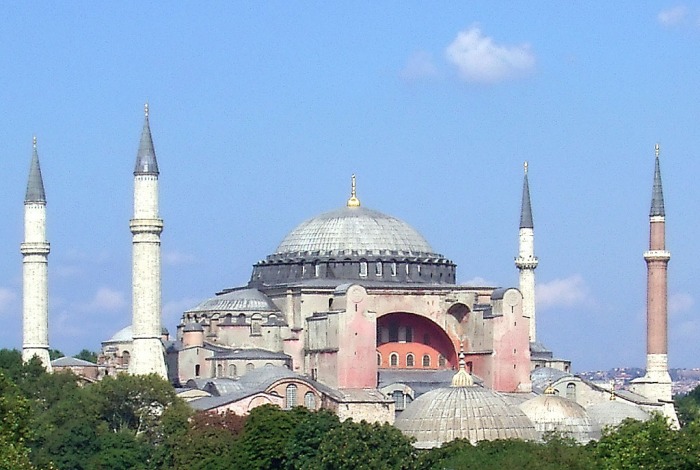 Hagia Sophia must have been impressive to Vikings who came from the fjords and was used to longhouses. (Photo: Saperaud / Wikimedia Commons)

Hagia Sophia served from the date of its construction in 537 AD until 1453 as an Eastern Orthodox cathedral and seat of the Patriarchate of Constantinople.

Why were pagan Vikings carving runes in this church already in the 800s?  Were they traders who had traveled down the Russian rivers and crossed the Black Sea with furs and walrus ivory – and went “sightseeing” in the most stunning edifice at the time? Or were they mercenaries working as imperial guards?