Researchers believe that the Vikings most likely wore tattoos and that they adorned their bodies with the same patterns and motifs used on weapons, jewelry and other items.

Numerous discoveries of beautifully decorated objects testify that the Vikings had a great interested in art.

The Oseberg style is named after the Oseberg ship grave (c. 834 AD) discovered in a large burial mound at the Oseberg farm near Tønsberg in Vestfold, Norway. Including the ship, the site also contained numerous richly decorated wooden objects, tapestries and hundreds of other artifacts. 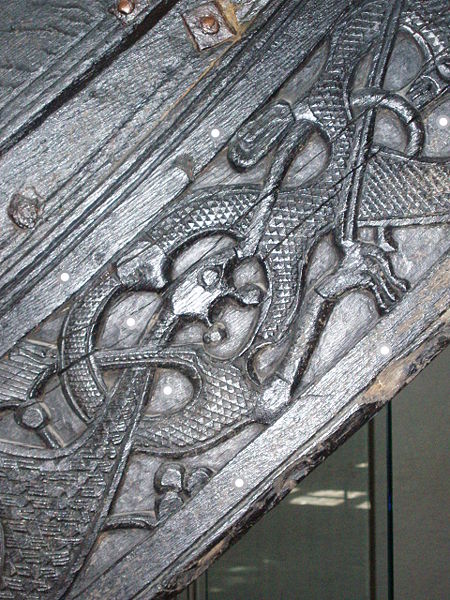 A characteristic motif is the so-called gripping beast. The gripping beast is what clearly distinguishes the early Viking art from the styles that preceded it. The chief features of the gripping beast are the paws that grip the borders around it, neighboring beasts or parts of its own body.

The Borre style is a Viking age animal ornamentation which was first named after artifacts from a burial mound near the village of Borre in Vestfold, Norway. 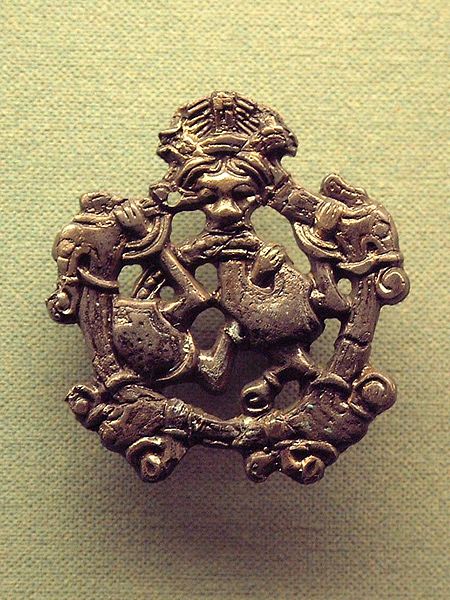 The style evolved at the latest about 850 AD and was still used in the late 10th century. This art style was popular in areas settled by the Vikings. It was mainly employed to decorate jewelry, belt-fittings and woodwork.

Its most characteristic motif is the so-called ring braid that consists of a symmetrical braiding with two bands, held together by rings that are surrounded by square figures. It frequently featured mask-head like animal heads, pretzel shaped bodies, and gripping paws.

Plaited knots and ring-chain patterns are also common. The ridges of designs in metalwork are often nicked to imitate the filigree wire used on the finest pieces.

The Jelling style is a phase of Scandinavian animal art during the 10th century. The style is characterized by markedly stylized and often band-shaped bodies of animals.

It was originally applied to a complex of objects in Jelling, Denmark, such as Harald Bluetooth’s great runestone, but later research categorizes them as the Mammen style.

The Mammen style is a phase of Scandinavian animal art during the late 10th century and the early 11th century. The style is named after finds from a chamber tomb in Mammen on Jutland, Denmark. The finds included a silver engraved ax of which one side shows a markedly stylized animal with long appendages braided along the body.

There are animal representations that can have a more realistic style, like one of the lions on the Jelling stones. During this style there was an introduction of plant motifs.

The Ringerike style is an animal style from the late 10th century and the 11th century, which evolved out of the earlier Mammen style. It has received its name from a group of runestones with animal and plant motifs in the Ringerike district north of Oslo. The most common motifs are lions, birds, band-shaped animals and spirals.

Some elements appear for the first time in Scandinavian art, such as different types of crosses, palmettes and pretzel-shaped nooses that tie together two motifs. Most of the motifs have counterparts in Anglo-Saxon art and Ottonian art.

The Urnes style was the last phase of Scandinavian animal art during the second half of the 11th century and in the early 12th century. The Urnes style is named after the northern gate of the Urnes stave church in Norway, but most objects in the style are runestones in Uppland, Sweden, which is why some scholars prefer to call it the Runestone style. 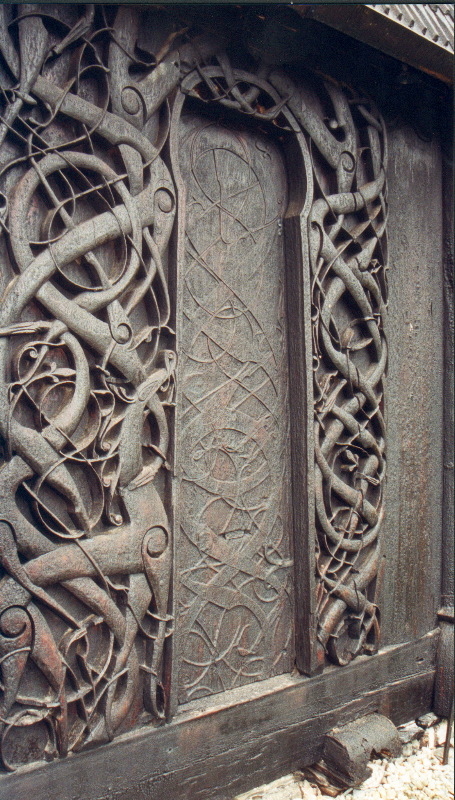 The style is characterized by slim and stylized animals that are interwoven into tight patterns. The animal’s heads are seen in profile, they have slender almond-shaped eyes and there are upwardly curled appendages on the noses and the necks.