The “Greek Yogurt” Made in Northern Norway Dispute 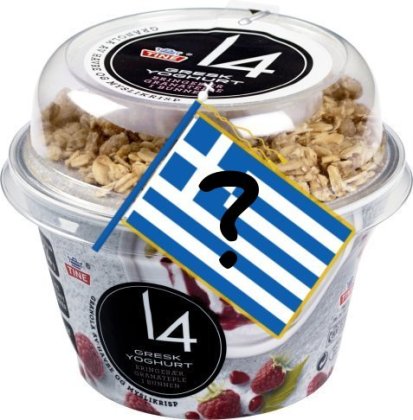 This yogurt, produced in Tana in Northern Norway by dairy producer Tine, is marketed and sold in Norwegian grocery stores as “Greek yogurt”. The shortest road route between Tana and Athens is 5024 kilometers (3200 miles), and the only similarity between people from Northern Norway and Greeks is a fiery temper.

The competitor, Synnøve Finden, produces their Greek yogurt in Greece, and will by April 8 go to trial unless Tine stops their deceptive marketing.

PR Adviser Veronika Skagestad at Tine admits that the “Greek yogurt” is made ​​in Tana, and the reason is that they have the production equipment needed to filter the yogurt in the traditional Greek way.

Synnøve Finden claims that Tine presents their product so that consumers get the impression that this is a genuine Greek product, and that the use of letters appear to be “Greek”.

Synnøve Finden has had big success with their yogurt. It is made by the Greek supplier Mevgal, which is located in northern Greece and manufactures the product by using Greek milk.

Tine introduced several “Greek yogurt” variants after Synnøve Finden’s success. Tine argues that the labeling is in line with the Marketing Control Act, and has no plans to make changes to the packaging:

– “Greek yogurt” is in our opinion similar to using the expressions “Greek salad” and “Italian pizza” where a geographical name is not  perceived as a place of origin, but as a description of the product type. We have not yet received any feedback from consumers that the labeling is unclear, but we will certainly listen if consumers believe we should be even clearer, says PR Advisor Skagestad to Aftenposten.

She says that Tine already in 2012 was the first with a “Greek yogurt” variant, and that it was Synnøve Finden who in 2013 followed with their version.

Editor’s Note: What if the two competitors enter into a compromise and Tine brands the product: “Greek Yogurt Made in Tana”? “Tana” sounds Greek anyway…