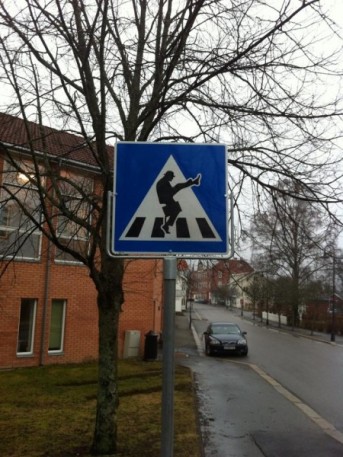 Most people are having a good laugh when they see the pedestrian crossing signs in the village of Ørje in Eastern Norway. Unfortunately, the Norwegian Public Roads Administration does not share the same form of humor and say they are going to remove them.

– If the Mayor does not take them down, we will remove them, says Head of Department Ivar Anton Christiansen to Norwegian Broadcasting Corporation, NRK.

The Monty Phyton sketch “Ministry of Silly Walks” from 1970, where John Cleese plays a minister who is responsible for developing silly walks, is the inspiration behind the idea of a group who call themselves “Kreativiteket”. They say that there is no deeper meaning behind the pedestrian signs, it is just everyday humor.

– I think the signs should be allowed. They are not to any nuisance and are very similar to normal pedestrian crossing signs. In fact, no one has noticed that we have changed them, after all, they have been there a couple of months, says Mayor Kjersti Nythe Nilsen.

She has no plans to remove the signs and must therefore resort to civil disobedience.

– This is a storm in a teacup. I think that they should be allowed to be placed where they are right now, she says.

It remains to see whether the Norwegian Public Roads Administration actually will travel to Ørje and remove them.

Like Loading...
‹ Salangen News: ‘A Somewhat Dangerous Drainpipe is Laying in the Street’
Norwegian Descendants in the United States ›