From their extensive archives, the National Museum of Art, Architecture and Design found a unique 1930’s model of Oslo. The 356 square feet large capital was created by architect Harald Hals, and is now like a big puzzle waiting to be completed.

The model shows Oslo from the 30’s, with revisions from 1940’s, and is made of over one hundred pieces. Hals was an influential architect and urban planner during the first half of the 1900’s, and he was behind the development of some of Oslo’s most known parks and apartment buildings.

– The intension was to use the model as a kind of tool. But when the planning was completed, they “froze” it and it became a historical document, says curator at the National Museum of Art, Architecture and Design, Juliane Derry.

Juliane’s task is to clean the model that has been hiding in a basement. But before she can start cleaning, she must ensure that all the pieces are still intact.

– The pieces were found unprotected and unorganized standing against the wall in a very dark basement. When we took them out, I thought we could not possibly have gathered all of them, she continues. 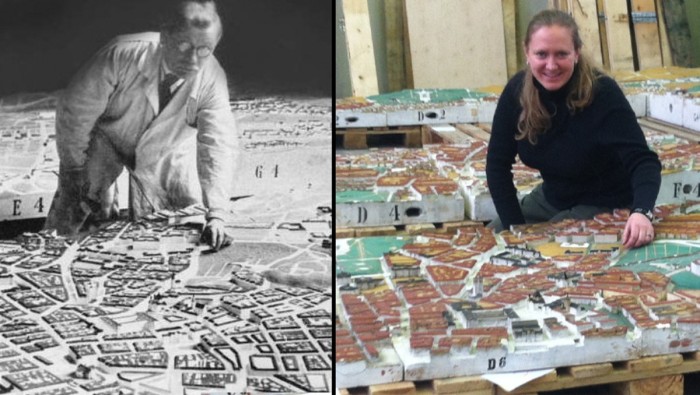 On the left: Harald Hals and his Oslo model. On the right: Juliane Derry has rebuilt the model from the 1930’s.

But after two weeks of research at the Oslo School of Architecture and Design, they are certain.

– We thought for a while that we were missing one big piece, but then we found the number system written on each side, so all the pieces literally fell into place, she says.

The model varies in thickness from 2 to 18 inches (5-45 cm), and follows the topography of the city.

Some parts are made on the basis of proposals that were never realized.

One example is Grünerløkka: Architect Hals planned to redevelop the whole area, and in his model all the old tenements are replaced by tower blocks and a stylish park area in the center. Today, this is one of the most popular areas in Oslo despite the old tenements.

– I am very pleased that people finally can see it. It is nice to see that some places look exactly like they planned it several years ago, and not to mention the places that were not completed, Juliane says.

It is a permanent exhibition which opens in September 2014 at the Oslo School of Architecture and Design.

Like Loading...
‹ Famous Norwegian Classics: Aurlandsskoen – “Penny Loafers”
This Footprint Most Likely Belonged to a Young and Bored Viking ›