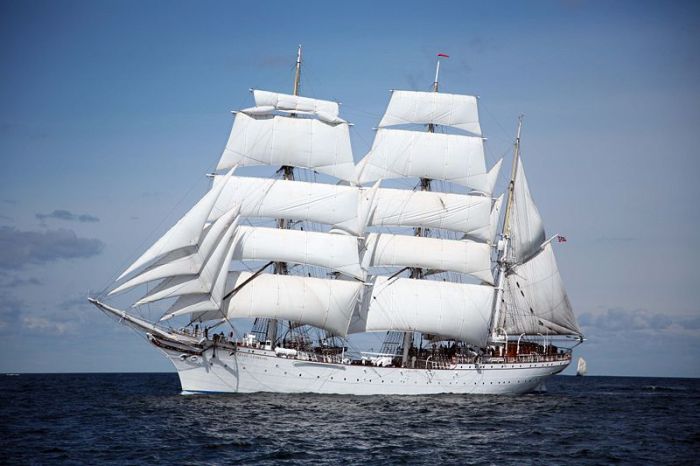 The three-masted barque “Statsraad Lemkuhl”, built in 1914, is one of the proud vessels that will participate in The Tall Ships Races.

The beautifully located Fredrikstad, last host port in 2005, is once again a host port for the 2014 Tall Ships Races. Being the second time this historic town will host the races, it promises a social and cultural program give every crew members and visitor the ‘experience of a lifetime’.

The Tall Ships Races is the world’s largest sailing ships event and are designed to encourage international friendship and training for young people in the art of sailing. The races are held annually in European waters and consist of two racing legs of several hundred nautical miles, and a “cruise in company” between the legs.

Each year about 70 – 100 big and small sailing vessels and 6000 crew members are participating in the event. The regattas are organized by Sail Training International.

Many people show up to see the twenty largest vessels participating in Class A: “All square – rigged vessels (barque, barquentine, brig, brigantine or ship rigged) and all other vessel more than 40 meters Length Overall (LOA), regardless of rig”.

You can learn more about the participating ships here.

Located about 90 kilometers south of Oslo, Fredrikstad offers rich cultural life, a bustling quayside and a cozy Old Town. It’s proud to be the best preserved fortress town in Scandinavia with a rich history, shops, galleries and cafés.

Founded in 1567, by King Frederick II, Fredrikstad is situated where Norway’s longest river Glomma meets the sea. It’s traditionally been an important harbor for timber export, then later for shipbuilding, until the main yard was closed in the 1980s.

The Tall Ship Races in Fredrikstad co-insides with the celebrations of the 200th anniversary of Norway’s Constitution and independence.

Program details will be confirmed during spring 2014.

1200 All ships have arrived