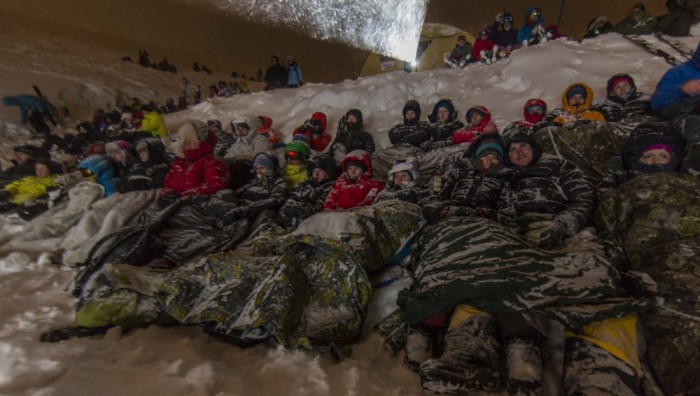 Wrapped up in sleeping bags and down jackets, the film audience enjoyed themselves during this year’s Snøfilm Film Festival (Photo: Lars Østbye Hemsing / Snøfilm)

Last weekend, what must be the world’s coldest and most remote film festival was held at the top of the Børrenøse Mountain, located on Tyin-Filefjell at the entrance to the Jotunheimen National Park, Norway. Approximately 500 people braved the weather wearing sleeping bags and down jackets in the outdoor amphitheater for this year’s most unique movie experience.

Snøfilm (Snow Film) is free for all film enthusiasts. The audience got to experience an exclusive preview of Tommy Wirkola’s horror movie “Dead Snow 2”, Disney’s animated film “Frozen” and the snowboarding documentary “Supervention”. All films have Norwegian winter as recurrent theme. 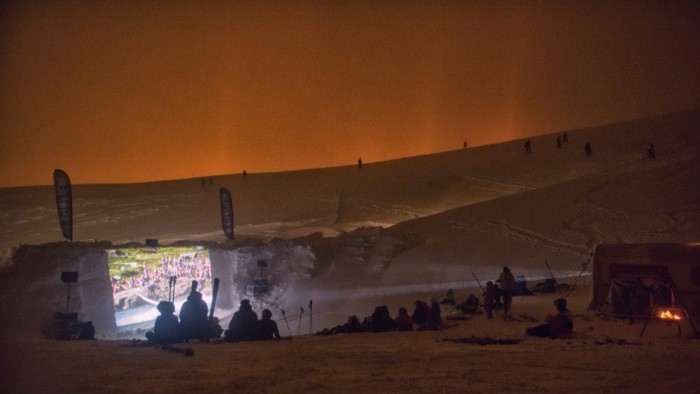 Never before has a movie screen been whiter than at the Snøfilm Film Festival. (Photo: Snøfilm)

The movie screen measured eight times five meters, and was carved out of snow. While adults were enjoying themselves out in the cold, children were indoors in Filefjellstuene watching kids’ movies.

– This year’s Snøfilm was a huge success. People braved the weather and headed for Børrenøse, and we are very happy, says event manager for Snøfilm, Carl Frithjof Tidemand-Johannessen in a press release.