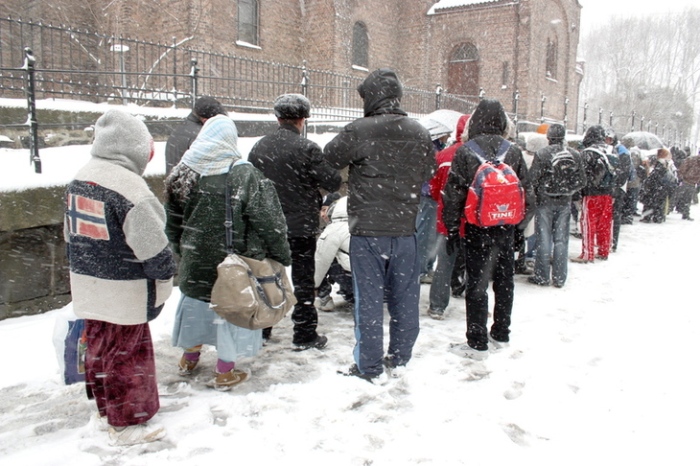 Unfortunately, not all Norwegians are wealthy: People standing in line in front of the Poor House in Oslo.

Last Wednesday, Reuters reported that every Norwegian had become a crown millionaire, in theory. A preliminary counter on the website of the central bank, which manages the Norwegian Oil Fund, rose to 5.11 trillion crowns ($828.66 billion), or about $164,000 per Norwegian. The impressive sum is poor consolation for about 14 percent of all children in Oslo living below the EU poverty line.

Set up in 1990, the Norwegian Oil Fund (officially the Government Pension Fund of Norway) owns around 1 percent of the world’s stocks, as well as bonds and real estate from London to Boston.  Norway has sought to avoid the boom and bust cycle by investing the cash abroad, rather than at home. Governments can spend 4 percent of the fund in Norway each year, slightly more than the annual return on investment.

“All Norwegians Are Millionaires”

The news that “all Norwegians have become millionaires”, quoted in various international media like TIME and CNBC, has given the impression that all Norwegians are as rich as Uncle $crooge. The comment sections contain a mixture of admiration and envy, as this example from cnbc.com by “resonate”:

“I just got my DNA test back and dang if I ain’t part Norwegian. I’m looking into filing for my lazy American part Norwegian subsidy. Maybe I can relocate and live the good life off my oil subsidies. Of course I will die young and have to answer for this at the judgment. Think maybe the oil subsidy also cover that?”

Yes, “resonate”, the majority benefit from great government welfare schemes such as fully paid sick leave, pension and 49 weeks of parental leave. That is, if you are or have been in regular employment for a certain period. The problem arises if you are outside the labor force due to physical or mental illness, drug addiction or you are young and just graduated and have trouble getting your first job. Then it is very likely that you will not benefit from the welfare system – except from emergency social assistance.

In 2011, the Norwegian government for the first time (!) presented the poverty numbers in Norway. In total there were 215,415 poor, which accounted for 4.5 percent of the total population.

The problem was biggest in Oslo where 11 percent of the households were considered poor when using EU’s standard to calculate; all households with less than 60 percent of the city’s median income. More alarmingly, a total of 14.4 percent of all children in the city lived in a poor family.

Since 2011, the difference between rich and poor in Norway has increased, which can be confirmed by the Salvation Army, the Church City Mission and the Poor House facing increasingly longer lines of people in need.

Constantly changing governments have promised to solve the poverty problem – without any success. We may ask ourselves whether this is due to lack of knowledge, will or creativity. The fact that Norway is the world’s richest country per capita and that the oil wealth is growing abroad does not help families who cannot afford to eat a daily hot meal or take the kids on summer vacation.

ThorNews is very proud of Norwegian culture, our democracy and the fact that this year we are celebrating the 200th anniversary of Norway’s constitution. Maybe we should use this event to do something about our democracy’s greatest challenge: Poverty?