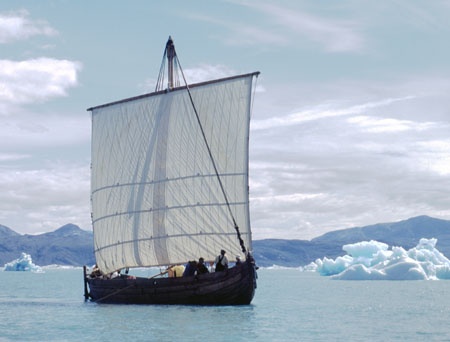 Erik the Red must be regarded as one of history’s greatest PR geniuses by naming the ice-capped continent “Greenland”. (Photo: Unknown)

Have you ever wondered why barren and ice-covered Greenland is called “Greenland”? In order to lure as many potential settlers as possible, Viking and PR genius Erik the Red deliberately gave the land an appealing name, with the aim to establish a viable colony.

Erik Thorvaldsson, (about 950 – 1003 AD) known as Erik the Red, is remembered in medieval and Icelandic saga sources as having founded the first Norse settlement in Greenland. The Icelandic tradition indicates that he was born in the Jæren district of Rogaland, Norway. The appellation “the Red” most likely refers to his hair color and the color of his beard. 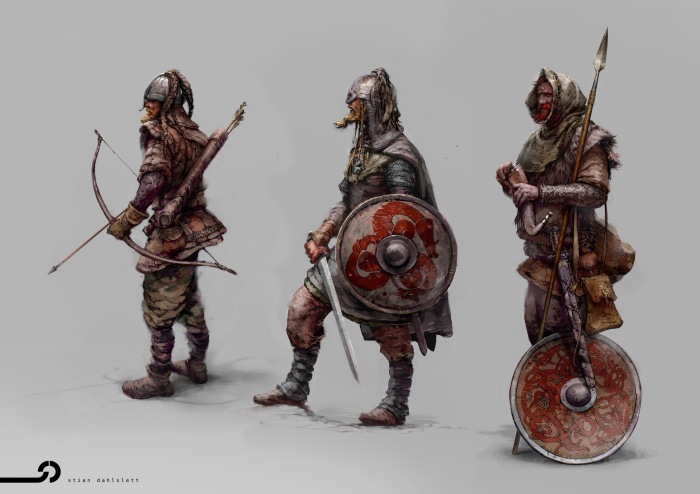 Did Erik the Red look like the Viking warrior to the right? Illustrated by Norwegian concept artist Stian Dahlslett ©

Erik the Red’s father was banished from Norway for the crime of manslaughter. He sailed west from Norway with his family and settled in northwestern Iceland. The Icelanders later sentenced Erik to exile for three years due to “some killings” he committed around the year 982.

After being sentenced to exile, Erik sailed to a somewhat mysterious and little-known land. He rounded the southern tip of the island (later known as Cape Farewell) and sailed up the western coast. He eventually reached a part of the coast that, for the most part, seemed ice-free and consequently had conditions that promised growth and future prosperity. According to the Saga of Erik the Red, he spent his three years of exile exploring this land.

“The Land of Opportunity”

When Erik returned to Iceland after his exile had expired, he is said to have brought with him stories of “Greenland”. Erik deliberately gave the land a more appealing name than “Iceland” in order to lure potential settlers. He explained, “People would be attracted to go there if it had a favorable name”.

He knew that the success of any settlement in Greenland would need the support of as many people as possible. His salesmanship proved successful, as many people became convinced that Greenland held great opportunity – especially “those Vikings living on poor land in Iceland” and those that had suffered a “recent famine”.

After spending the winter in Iceland, Erik returned to Greenland in 985 with a large number of colonists and established two colonies on its southwest coast: the Eastern Settlement or in modern-day Qaqortoq, and the Western Settlement , close to present-day Nuuk.

The settlement venture involved 25 ships, 14 of which made the journey successfully; of the other 11, some turned back, while others disappeared at sea.

The settlements, both established on the southwest coast, proved the only two areas suitable for farming. During the summers, when the weather favored travel, each settlement would send an army of men to hunt in Disko Bay above the Arctic Circle for food and other valuable commodities such as seals used for rope, ivory from Walrus tusks, and beached whales.

In Eastern Settlement, Erik built the estate Brattahlíð, near present-day Narsarsuaq. He held the title of paramount chieftain of Greenland and became both greatly respected and wealthy. 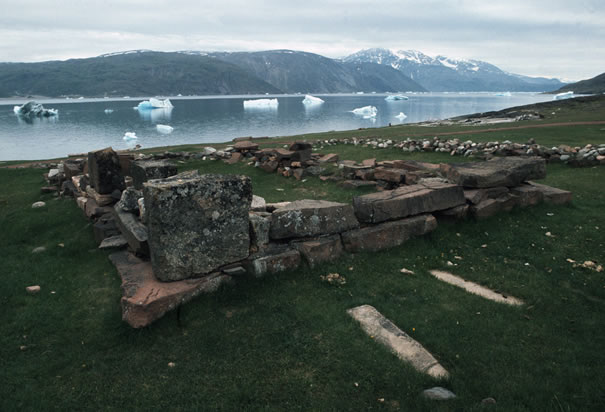 The ruins of the house said to have belonged to Erik the Red at Brattahlíð, Greenland. (Photo: history.com)

The settlement flourished, growing to about 2500 inhabitants spread over a considerable area along Eriksfjord and neighboring fjords. Groups of immigrants escaping overcrowding in Iceland joined the original party.

However, one group of immigrants which arrived in 1002 brought with it an epidemic that ravaged the colony, killing many of its leading citizens, including Erik himself.

Nevertheless, the colony rebounded and survived until the Little Ice Age in the 15th century. In addition to an increasingly colder climate, conflict with Inuits moving into Norse territories, drop in value of walrus ivory, the colony’s abandonment by Norway and other “unfortunate” circumstances became other factors in its decline.