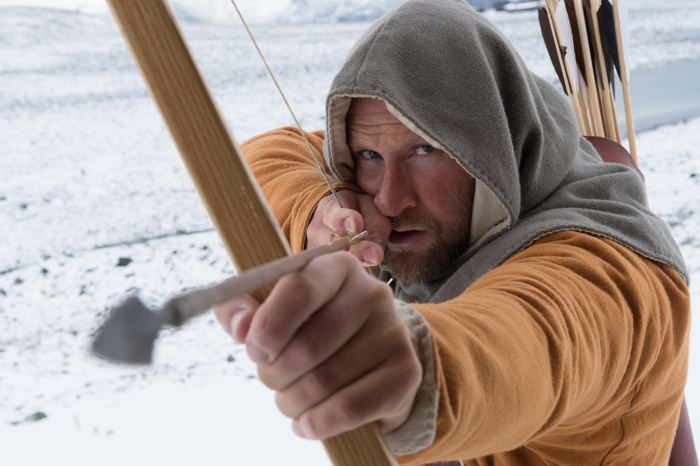 On 7 September 2011, an advanced constructed and complete bow was found at the edge of the Åndfonne glacier in Breheimen mountain range. The C14 dating shows that Norway’s oldest and best preserved bow is 3300 years old.

The 131 centimeters long bow was discovered by archaeologists in connection with the last check before summer fieldwork was completed. The bow was found at the ice edge about 1700 meters above sea level. This shows how important it is that archaeologists are present just when the ice is melting.

Findings of complete bows are very rare, and it turned out even rarer after the results of the C14 dating returned from the laboratory in the U.S.: The bow turned out to be 3300 years old – dating back to about 1300 BC – in other words from the early Bronze Age.

It is the oldest bow ever found in Norway, and in addition it is in perfect condition! It is made from one piece of hardwood. Analysis of the design shows that there has been an experienced and skilled bow maker who designed it.

The bow is broken at one end, probably during hunting, which is probably why it was left behind by the owner.

Findings of both arrows and scare sticks dated back to the Iron Age shows that the Åndfonne glacier in Breheimen National Park has been an attractive hunting area for thousands of years. In the summer, reindeer and other animals seek glaciers and snowfields to escape insects, and hunters hid at the edge of the ice.

(Based on a note from archaeologist and bow maker Ivar Malde)

Findings of bows in Norway, and in the rest of the world, are very rare. This is probably primarily due to the fact that bows are made ​​of materials that quickly decompose. The so far oldest finding in Norway is parts of a longbow made ​​of yew from the Veiem tomb in Grong, Nord – Trøndelag County. The tomb is dated to the 500’s AD. Approximately half a bow from the Gokstad find dating back to around 900-905 AD is also preserved.

The bow from Breheimen is a surprising finding. Very few bows are known from the Bronze Age: The closest we come is the so-called De Zilk-bow from the Netherlands made ​​of yew dated to between 1950 and 1680 BC, and a bow from Fiavé-Carera, Italy dated to 1600-1400 BC. Both of these bows have a narrowed and thickened grip that is also found in Danish Stone Age bows. However, the bow from Breheimen has no marked grip which is similar to the later longbows (…).

The Breheimen-bow’s cross section is interesting. It appears to be oval in the middle part, while the outer parts have a triangular cross-section. The back, which faces away from the archer, consists of outer year ring of the original tree stem. This provides a very safe bow, with continuous fibers throughout the bow’s length. The belly, the side facing the archer, is shaped so that the pressure from being bent is distributed as evenly as possible along the entire length. 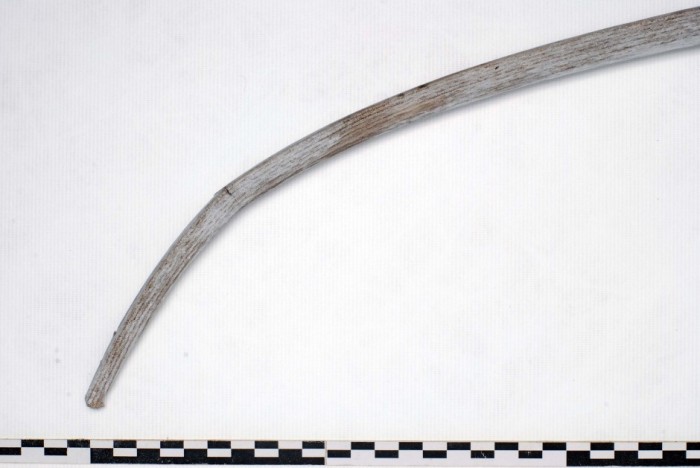 The ends with triangular cross-sections are a known technical tricks that you see on some prehistoric and historic types of bows. By giving the belly a sharp “keel”, the bow feels smoother to pull and stores more energy. Stiff, lightweight endings also provide a rapid straightening of the bow, which further increases the speed of the arrow.

Thus, this is no primitive “stick”, but a carefully designed and crafted tool. Moreover, the quality of craftsmanship is high – with a nicely shaped cross-section and slender lightweight endings.

The Breheimen-bow is currently on display at the Norwegian Mountain Museum in Lom.