The Norwegian coast goat is a unique goat herd known for its robust appearance and exclusive meat.

It has been documented that coast goats have been around since the 1700s. Selje municipality in Møre and Romsdal County is the only place in Norway where you can find a small amount of these special goats. The steep landscape and harsh climate out in the open ocean gives the meet its typical taste and consistency.

The coast goat resembles the Norwegian milk goat, but they produce less milk and have more and better meat. The coast goat has strong legs and thick wool. Most of them, both male and female, have horns. They are known for their good behavior, and are easy to tame through repeatedly contact with humans. The maternal instinct is very strong, and up to three generations stick together. 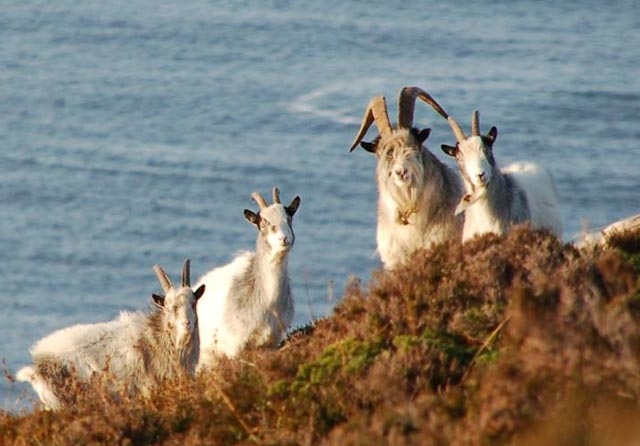 The animals live outdoors most of the year. They are moved indoors in the late winter when the females give birth to shelter the newborns from predators (mostly birds) and to keep the animals tame.

Most male goats are castrated. Their ribs are used for Pinnekjøtt – a traditional Norwegian dish – and cured goat legs from 3-4 years old castrates are the most popular products. Earlier, goats head, called skjeltehaud, and the rest of the animal were also considered delicacies. Today, some people still make Blodpølse – blood sausages – but most of the traditional cooking is (sorely) slowly fading out.

The Norwegian Coast Goat is however a threatened species. There are only 180 breeding animals left in Selje. Even though the number has increased during the last years, there is a desperate need to increase the population even further.