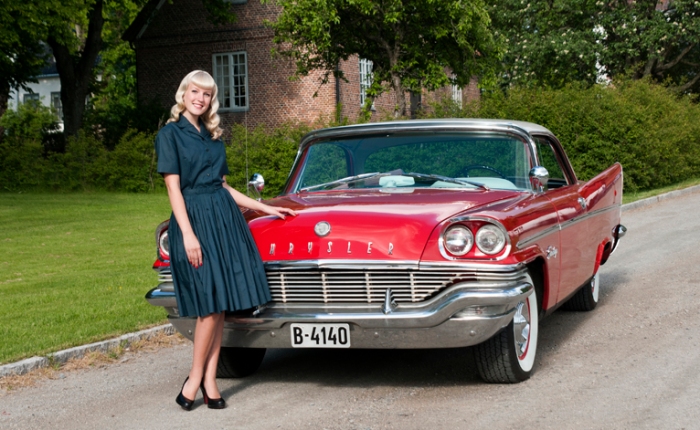 American Car Club of Norway (ACCN) is a member organization for classic American car fans. The association has over 90 affiliated local clubs and more than 16,500 enthusiastic members who have made their hobby into a lifestyle and way of life.

ACCN was the driving force behind the ‘30-year rule’, which allows Norwegians to import old classic cars without paying any taxes. This is probably the main reason why there are so many well-maintained classic American cars in Norway (somewhat different from Cuba.., Editor’s note). 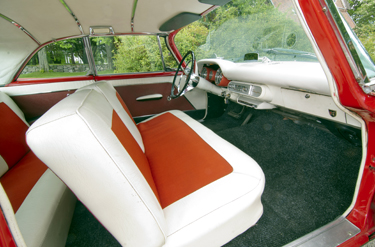 Many people have tried to build a time machine. As far as we know, no one has succeeded. Imagine if we could put ourselves into such a machine and go back to the year we want, like Marty McFly and the Professor did in the movie “Back to the Future”. The closest we get to a time machine is possibly this 1957 Chrysler Saratoga and its owner Marte Johannessen.

The car is a “real” time machine when we see the owner behind the wheel. It’s like suddenly being back in 1957 and observing a brand new Chrysler driving around the corner with its proud owner. When the stunning lady steps out, she is dressed exactly as they were in 1957. From time to time, we are looking into Norwegian fifties magazines like “Hjemmet” and “Allers” with pictures of exactly these types of cars, and photo models quite similar to the vehicle owner.

Marte Johannessen from Borgenhaugen close to Sarpsborg, is the happy owner of this car and she also looks like a fashion model. Marte has not dressed up for the occasion, but it looks like she is cut out of a fifties magazine or from the movie “Back to the Future”. She is addicted to the rockabilly style, and the fifties values. Marte explains her style as follows:

– I have been fascinated by this time period since I was a child. I grew up in a family where music and nostalgia played an important role, and my father also had a great interest in American cars. It is difficult to explain, but one thing often leads to another. It’s not only the cars that appeals, but also clothing, interior, music and more from the post-war period up until the early sixties, she explains.

– When I got the Chrysler, I got even more interested. It developed into a hobby and eventually to something more, because I got aware of all the exciting vintage clothes and interiors out there. Things simply looked better than today, with focus on quality and design. The shapes, colors and patterns appeals to me and is the main reason why I choose to dress like this. It is the traditional and authentic style I probably like the best. The fifties was a decade that can be summarized in one word – optimism. I cannot help it, but the music, cars, clothes and everything about the fifties makes me happy, says Marte.

Today, the annual “Hot August Nights – Amcar Grand Nationals 2013 in Trondheim” was opened.  Thousands of classic American car enthusiasts meet and show off their four-wheeled jewels. You will find the program here.

Source and photos by: Amcar Magazine