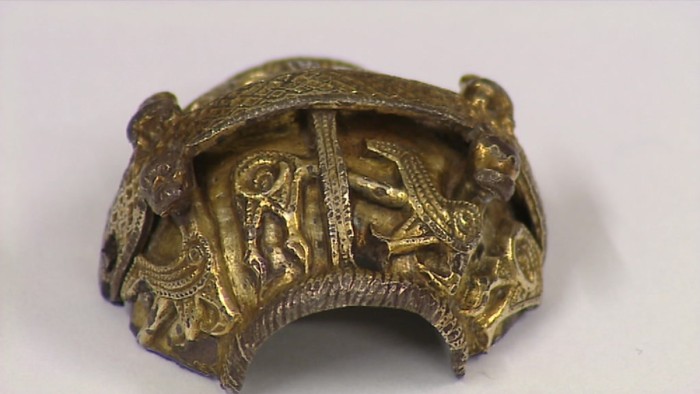 If it wasn’t for the Norwegian Vikings, this Irish crosier probably would have been lost.

This piece of plated silver was found in a Viking grave in Grytten, Møre og Romsdal in the 1960s. The object was later moved to the NTNU University Museum in Trondheim. In the British Isles all crosiers from the same period have been lost.

– This piece has been a part of a crosier from the 700s AD. It comes either from Ireland, Scotland or England. The crosier has certainly been robbed by Norwegian Vikings and brought back to Norway, Jon Anders Risvåg at the NTNU University Museum told Norwegian Broadcasting Corporation (NRK).

In the same mound it was also found a magnificent reliquary, coins and pearls. Probably it was a Viking chief who was buried there.

– We are confident that Norwegian Vikings have stolen the crosier during a plunder mission. The crosier has probably been around one meter long, and we have thus a part of the top lying here, Risvåg said.

In March, Griffin Murrey from Ireland came on a visit to Trondheim to take a look at the part of the crosier. Murrey is a doctor of archeology.

– The crosier had a great symbolic value to the Church in the beginning of Christianity, and it was important during the Christianization of the country, Murrey said to NRK.

When the Norwegian Vikings sailed to Ireland and the British Isles one of their aims was to steal as many valuables as possible.

– Monasteries and churches were obvious targets. They were unprotected possessing objects of great value. Often it was beautiful objects with great decorations. When these came back to Norway, they often were destroyed and used for other purposes. According to Murrey, the Vikings did not have any relation to religion. 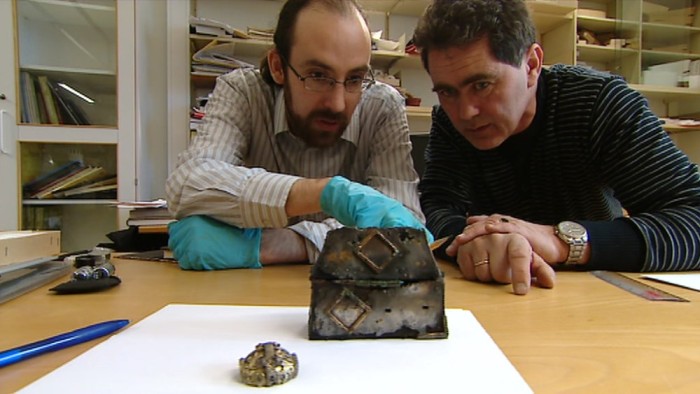 Dr Griffin Murrey (left) examines the piece of the Irish crosier. In the picture we see the reliquary that was found in the same grave.

The NTNU University Museum has no immediate plans to exhibit the beautiful piece of the old crosier, but it has previously been exhibited.

– We in Ireland will not claim to get it back. It has been in Norway for a very long time, and belongs here. But it has been in Ireland as part of a Viking exhibition. It is not only important in an Irish context, but also in a European, Murrey stressed.