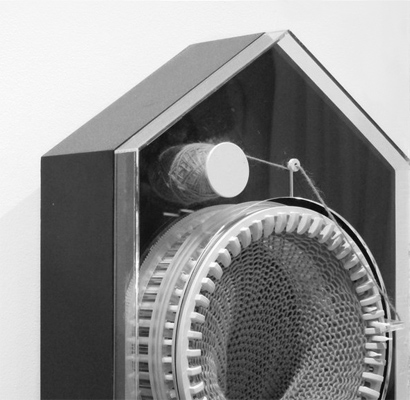 Siren Elise Wilhelmsen is creating concepts and designs for products, furniture and installations – both for the professional and the private market. Her aim is to make functional and sustainable design with personality and humour; products that challenge the meeting between man and his surroundings and that offer a new kind of interaction with them.

In 2010 she created a piece that would make her famous: The Grandfather Knitting Klock. The clocks knit a singlestitch every half hour, and runs 24 hours a day. During one year, the clock is able to knit a 6 foot (2m) long tube scarf. 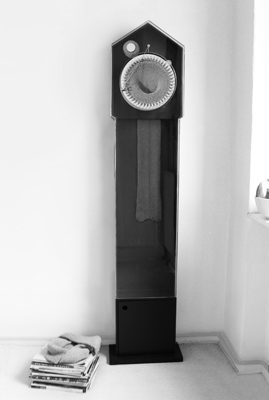 «I was working with numbers when I had the idea. Numbers define time, but time actually has little to do with numbers. I wanted to base my point of departure in the nature of time and show the passage of time in a three-dimensional and tangible way. Everything goes so quickly for us. We let ourselves get stressed and blame the time which is flying past. When you sit in front of the knitting clock, however, you experience that it is we who produce the stress because the clock works so slowly that you can hardly see that the yarn is forming the mesh», Wilhelmsen says.

The world’s first knitting clock has attracted attention at exhibitions in Berlin, Milan, London and Copenhagen. In 2012 Wilhelmsen was honoured with the Foundation for Design and Architecture in Norway’s award for the young designer of the year. The jury’s reasons for making the award stated that she “unites use with communication, and the works offer thought-provoking interactivity which illuminates everyday phenomena and existential questions in new ways.”

All photos by: Siren Elise Wilhelmsen