Home › Quirky › Luster Sanatorium Given Away for Free

Luster Sanatorium Given Away for Free

Up in the high mountains of Luster, Sogn og Fjordane County, a huge, old brick building is waiting for the right owner. If it was localized in Central Europe, you might think it was an old castle or hotel. But, no – this actually was one of the largest hospitals in Norway, named Luster Sanatorium.

On Norwegian Ebay (finn.no), Luster Sanatorium is advertised – for free! The entire building is given away to anyone who has the will and resources to restore and maintain this unique complex.

Luster Sanatorium opened in 1902 built by the St. Jørgen Foundation in Bergen. It served as a tuberculosis hospital and most patients came from the areas surrounding Bergen. The sanatorium was in operation until the mid-1950s.

Because of the dry climate, pine forests and thin mountain air – the sanatorium was built at Harastølen. Doctors believed that these elements could cure tuberculosis. It is located 500 meters above sea level above Luster. Hydro power was necessary and Luster Sanatorium had one of the first private water turbines in Norway.

During the first half of the 1900s, a very own community emerged at Harastølen. The patients had a farm, their own slaughterhouse, dentist, cinema, library and a chapel. An electric cable car was installed between the sanatorium and Luster dock. A 7 kilometer road with 13 hairpin-turns also leads up to Harastølen.

If you are interested in restoring one of Norway’s finest buildings, please see the advertisement here. 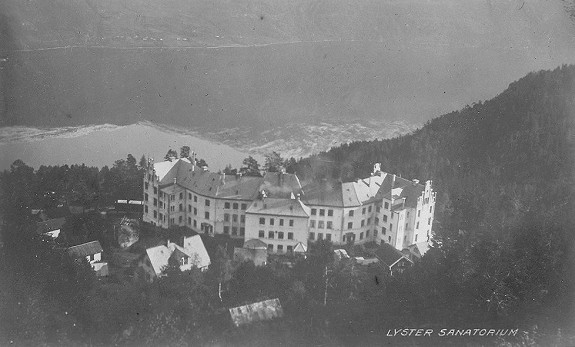 Like Loading...
‹ Norveg – The Coastal Heritage Museum in Middle Norway – A Must-See
Vikings Served the Byzantine Emperor as Mercenaries ›