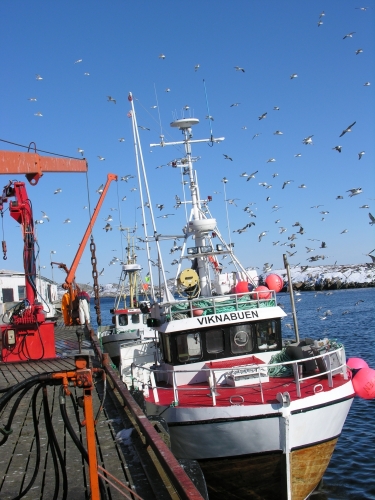 As a consumer, don’t you want to be sure that the food you eat is made of genuine and fresh products, in addition to great taste? At the Norwegian fish company Rørvik Fisk the owners control the entire value chain: From the fish is landed until the finished product is transported out of the factory.

The founders of Rørvik Fisk were Øivind and Marie Pettersen, but the actual fish sales started long before they even met. When Øivind was a little boy he sold fresh fish at Hurtigruten who had (and still has) two daily visits to the coastal village of Rørvik in Nord-Trøndelag County. The story goes back to the early 1900s, and tells that Øivind brought a bucket of golden redfish and sold them to the steward on board.

This was the beginning of Rørvik Fisk, and in 1927 the company was officially established by Marie and Øivind Pettersen. 86 years later, Rørvik Fisk is run by their son Ragnvald, and his son Øivind.

Today, the company is one of the largest suppliers of fresh fish and seafood in Middle Norway, and the only white fish merchant in Nord-Trøndelag. The fish is landed at one of Rørvik Fisk’s three reception plants, and then shipped world-wide. The Outer-Namdalen district, especially Vikna municipality is renowned for their rich coastal heritage and maritime identity.

Since the inception, Rørvik Fisk has always been true to their clean and genuine concept, and quality products. Pettersen Senior had a passion for fishing which he has passed on to his son and grandson. This passion has provided the company a solid foundation.

It is worth noticing that each generation of Pettersen personally inspects and controls the fish from it is landed until the product is transported out of the factory.

– Many people have asked me why I personally participate inside the factory and at the reception plants. I have only one answer: I want to have firsthand knowledge about the fish quality, and because I have a personal interest in fishing, CEO Øivind Pettersen Jr. tells ThorNews. For him it is an important task to take part in the practical work.

In mid-February, the Norwegian cod fishing season started. Pettersen Jr. is always on spot at Vandsøya, one of the reception plants, ready to take up spawn cod. In mid-March, the popular Skreifestivalen (Spawn Cod Festival) starts, and Rørvik Fisk invites the public to an open factory at Vandsøya.

Marie Pettersen is the reason why Rørvik Fisk has won several medals from The Norwegian Seafood Association for their gourmet products. In 1927 she began to produce home-made fish products in their private basement: Gourmet fish burgers, fish cakes, fish pudding, fish ball and fish soup balls. The company has always followed her recipes and the products have recently been nationally awarded for their excellent taste. Today, the products are manufactured in a modern and more efficient factory.

Rørvik Fisk owns three production facilities located in the coastal village of Rørvik. They employ 50 people, but during spawn cod season the staff is significantly increased.

Rørvik is a village and administrative center in Vikna municipality in Nord-Trøndelag County. It has nearly 3,000 inhabitants, its own airport and a rich coastal history. At Rørvik Harbor the northbound and southbound Hurtigruten meet every day.