According to Travel+Leisure, one of the world’s strangest towns is Longyearbyen located at the Arctic archipelago of Svalbard.

There is no dying allowed in this remote Arctic town—well, you can die, but you can’t be buried here. You heard that right: nobody has been buried in the local cemetery in almost a hundred years. Why? The perpetually frigid temperatures prohibit corpses from properly decomposing. Following the influenza epidemic of 1917, Longyearbyen banned burials in the town’s graveyard.

The local polar bear population rivals the human one, and it’s not abnormal for the townspeople to shoot a bear in self-defense (hunting is illegal). Even after a polar bear takes its last breath in this mining town, it must also be sent away for its final resting spot.

Read more about the towns here. 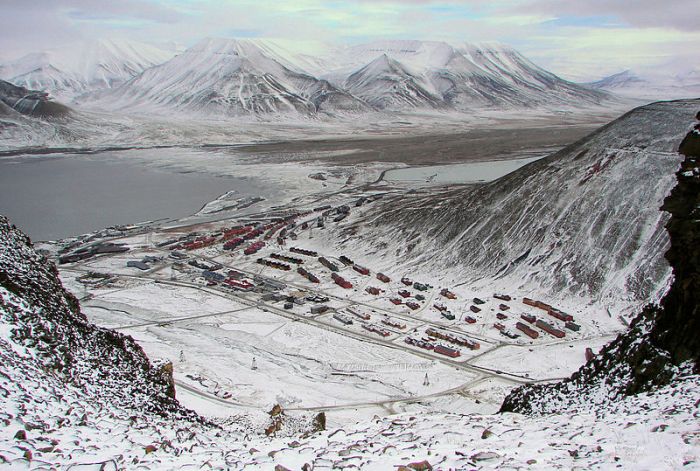 Longyearbyen, the Adventfjord and the Adventdalen valley seen from Platåberget (the Plateau Montain). (Photo by: Bjørn Christian Tørrissen/ Wikimedia Commons)

Longyearbyen is the largest settlement and the administrative center of Svalbard, Norway. As of 2008, the town had a population of 2,040 (not included polar bears, Editor’s Note).

Longyearbyen is located in the Longyeardalen valley and on the shore of the Adventfjord, a bay of Isfjorden located on the west coast of Spitsbergen. Since 2002, Longyearbyen Community Council has had many of the same responsibilities of a municipality, including utilities, education, cultural facilities, fire department, roads and ports.

The town is also the seat of the Governor of Svalbard and is the world’s northernmost town.