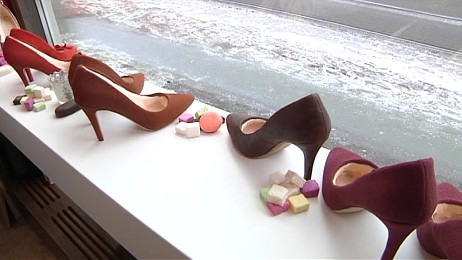 He has combined the two things most women are addicted to, and admits that men also can become fascinated with shoes.

There are many shoe shops in Oslo, but when it says “patisserie” on the outside, people really begin to wonder.

– It takes a few seconds before people perceive what they actually see, says confectioner Sverre Sætre who runs a patisserie in Oslo.

There has been no lack of reactions, and many believe that the shoes are real.

– Everybody wants to touch the shoes, many women wonder what sizes they are, Sætre says.

– An old lady came into the shop wondering why we were displaying shoes in the window. There also are men who come in and are very curious.

Could Have Become a Shoemaker

Sverre Sætre has been a TV chef and won several medals in culinary arts. He enjoys working with form, and that is precisely where the shoes fit in.

– It is important to find challenges in the job. The hardest part is to get the forms to harmonize and find the right curves.

– I’ve been in my wife’s closet, in shoe shops, and online. I have spent many hours on research, and I’ve got some strange looks, the confectioner laughs.

He also got a glimpse of what it is to be a shoemaker.

– It has been a challenge finding the right tools, and I’ve definitely gotten a glimpse of what a shoemaker does in his job, he says.

He does not deny that it could have been an alternative career choice.

– I think I had enjoyed the profession, to put it that way!  Maybe I would be missing eating shoes, the confectioner laughs. 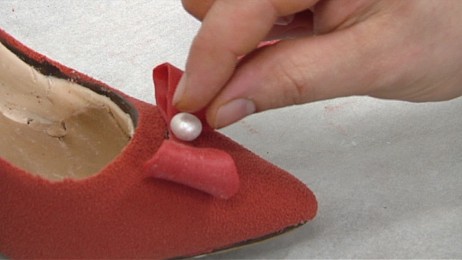 Although shoes are not something most men are concerned about, Sætre has started to appreciate many women’s passion.

– I understand the fascination for shoes; they are beautiful and have fantastic shapes.

But not all shoes look appetizing made of chocolate, and his favorite is pumps.