In March, the renowned author Zoë Ferraris visits the Oslo Crime Festival. She has published several books from the Saudi Arabian community and they have been translated into several languages. Together with writer colleagues like Val McDermid, Lars Kepler and John Harvey, she will attend the festival talking about the excitement and challenges in writing crime and mystery literature.

Previously, ThorNews has written about the ‘Easter-Crime phenomenon’ – a trend that started as early as 1923. Norway loves mystery literature, and several Norwegian crime writers are international well-known. The first Oslo Crime Festival was held in 2012. This year, the festival has reached new heights with nearly 50 international mystery writers attending. Among the prominent guests is Zoë Ferraris – as the only American author.

ThorNews got an interview in connection with her visit and writing success. The award-winning author tells ThorNews about her experiences in real life and the ones she has received from her books.

-My father was in the Army, so I was raised all over the US. Eventually we moved to San Francisco, which is where I live now. I feel very lucky to live on the old army base where I grew up, which is called the Presidio. Today it’s a national park.

Ferraris has been a full-time writer for six years, and has published three books so far.

In the 1990’s she married a Saudi Arabian man and moved to the city of Jeddah in his native country. It would become a powerful and challenging encounter with a world very few people know about.

Ferraris is one of few Westerners who have lived in the inaccessible and isolated area, and she knows the Saudi Arabian environment from the inside. She has chosen to convey many of her experiences from the Middle East through mystery novels.

She tells ThorNews that she had few ambitions to become a mystery writer, but eventually she felt that her stories had to be told.

– I didn’t set out to be a crime writer. I just wanted to write about a devout Muslim man in Saudi Arabia. Because of his religious beliefs, he doesn’t feel it’s appropriate to talk to women outside of his family, but unfortunately this makes it very hard for him to meet a woman — and he wants to get married. As I was working on his character I realized that something had to happen to force him to talk to a woman, to get to know her. He needed a dramatic push. I decided that the murder of a young girl would be enough to convince him to interact with a woman. So I wrote a murder mystery to put him in that challenging spot.

The book ‘City of Veils’ is about the investigation of a brutally murdered and severely disfigured woman found at the beach in Jeddah, Saudi Arabia. Detective Osama Ibrahim fears that the investigation turns into another hopeless case. Unsolvable ‘housemaid murders’ are unpleasantly common in a city where the veils of conservative Islam keep women as anonymous in life as the victim is in death. Digging deeper, however, an ambitious lab-tech named Katya discovers that the body is not that of a disobedient servant, but Leila Nawar, a rebellious young filmmaker who has made more than a few enemies with her probing documentaries on religious hypocrisy and sexuality.

Ferraris has used her own experiences from Saudi Arabia in her literature, and is inspired by the hidden world. She tells that the Saudi Arabian population is unaware of the life outside the country.

-My main inspiration is Saudi Arabia itself. It’s such a wild, diverse place, so full of contradictions, and most people don’t know very much about what life is like there. I lived in Jeddah for a year — in a Muslim family in a very conservative neighborhood – and my main characters are based on people I knew while I lived there.

Although the characters are based on people she knew in Saudi Arabia, she does a lot of research to discover the right elements that make the story believable.

– I have to do a lot of research because the books have a strong non-fiction element, and many times my characters are doing things that I never did myself, like appearing in courtrooms, and finding dead bodies, and getting stuck in remote places.

Her books describe an inaccessible world of devotion, prejudice and oppression. The mental distance between Saudi Arabia and the rest of the world is enormous. In Ferraris’ books readers are able to get a ‘sneak-peek’ into an unknown world.

– My books provide a look at the daily lives of regular people in a country that is difficult for most people to access. It’s hard to get a visa to go there, and certainly not for tourism, so my novels open a small window into that secretive place. They also challenge a lot of the stereotypes that people tend to have about the country. 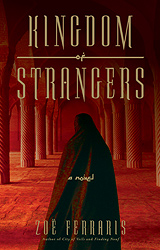 All her books have received great reviews worldwide. “City of Veils” from 2010 has become an international bestseller and is translated to several languages.

-Did your success come as a surprise to you?

-When my first book “Finding Nouf” was published, international crime fiction was not a big trend in America. There was also almost no serious fiction about the Middle East being published here. It was widely believed that mysteries were only successful if they were set in America, with American characters. I thought at the time that I would be very lucky if anyone read my books.

How wrong can you be? The rights to her books are sold in over thirty countries and have become bestsellers. In March, she will visit the Crime Festival in Oslo. Ferraris have never been to Norway, but tells ThorNews she is looking forward to the visit. What few people know is that she used to work with tourism related to Scandinavia. She has great expectations:

– This is my first visit in Norway. I used to work for a travel agency that specialized in Scandinavian cruises. My job was to manage all of the photographs on their website. So I spent a long time looking at incredible pictures of Norway and longing to visit. I think it must be a gorgeous and fascinating place, but this was a very glossy, romantic version of the country, and I’m sure there’s much more than that. My Norwegian publisher, Cappelen-Damm, invited me to the festival and I’m thrilled to be able to visit Norway and meet them finally. They’ve been incredibly supportive of my books.

In connection with her visit to Norway, Ferraris is preparing herself by reading Norwegian crime novels.

-I have read most of the work of Jo Nesbø and really enjoyed it. It’s definitely not the glamorous “tourist” vision of Norway that I’ve seen on the web, and I love crime fiction for providing that. In preparation for my trip, I’m delving into some of Karin Fossum’s books, and I hope that, while I’m there, I can find out more about your crime writers.

After her visit to Norway, the completion of her latest book ‘The Memory Seas’ awaits.

-In ten years from now – what are you writing about?

-I’m not really sure, but I hope to surprise myself.

ThorNews wants to thank Zoë Ferraris for her time and response – and we wish her the best of luck at the Oslo Crime Festival in March.