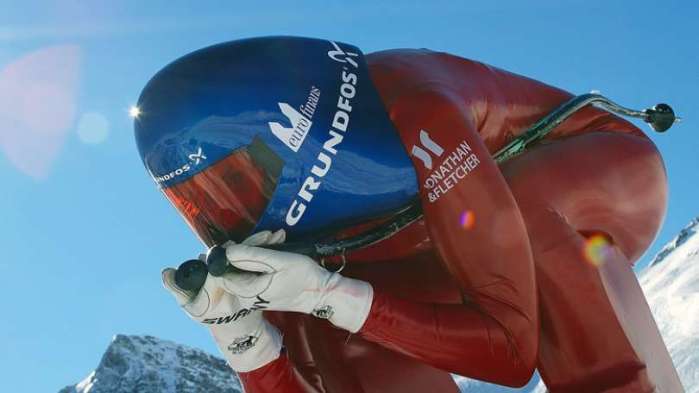 (Vars, France) In 1995, she won the World Championships silver medal and last Saturday she won the gold medal in a sport that frightens most people – speed skiing. Wearing a red latex suit and an aerodynamic helmet, without any other form of protection, the participants start from the top of a steep mountain. The speed is measured in the last 328 feet (100 meters) of the run.

-In the beginning of a race we stand sideways and have to rappel down the mountain. I concentrated very hard to do the task properly and quickly get into the right position. As the speed increased down the track I said to myself, “Hold!” I had to hold the position, and it went fine even though it was very windy.

After eight runs during the week there were only three female athletes left, and Pettersen was secured a medal.

The Speed Ski World Championships is held every second year.

– I was thinking that I was going to win the gold medal, and then quit the sports – but now I do not know anymore, Pettersen laughs.

Her aim is to raise enough money to attend the World Cup which starts in a few weeks in Canada. Swedish Idre also organizes two races, followed by Andorra and Verbier.

The World Championships final was dramatic. Pettersen was behind Swedish Sanna Tidstrand throughout the championship and was 1.9 mph (3 km/h) behind in the semi-finals. But the Norwegian veteran delivered when it counted the most, and won a quite superb victory – almost 1.2 mph (2 km/h) in front of her Swedish rival and current world record holder.

The World Championships is hosted by FIS every second year. In 2011, there were 91 participants.

A short introduction to speed skiing:

Like Loading...
‹ Norwegians Eat Far Too Much Salt and Too Little Fish
Keep Warm with a Blanket from Røros Tweed ›