The struggle for women’s suffrage was a tough battle against the established and male-dominated society, and the fight went on for decades. June 11 2013 marks the 100 anniversary of one of the greatest social changes in Norwegian history where women got full suffrage. Through 2013, the centennial year will be marked by events across the country.

Four Norwegian women are presented as particularly significant in the battle for full suffrage. Although several men played an important role in the fight, it has been a goal for the Voting Rights Committee to highlight the women. It is also important to remember that organizations and associations played a noteworthy role in the struggle.

The four selected women are:

The fight for Norwegian women’s suffrage began in the early 1880s. In 1890, the Parliament debated the proposal to introduce voting for women on an equal basis as for male suffrage. At that time there were still restrictions on male voting rights. The proposal was rejected by 70 against 44 votes. Opponents argued that the suffrage was against woman’s nature and that it would interfere with family life.

The opponents feared that women would neglect their role in the family, while proponents regarded the “maternal instinct” as an important contribution to politics, particularly on social issues.

The year 1905 became a milestone in women’s struggle for suffrage. 1905 marks the end of the union with Sweden, but only men were allowed to vote in the referendum. Through a campaign made by various women’s associations, 280,000 signatures from women across the country were collected. This was an important step towards full voting rights. The opponent’s argument against female suffrage was that women were not ready for political rights, an argument that became less credible after the campaign.

The signatures were equivalent to about 53 percent of the total female voters. An interesting aspect is that the figure matches the women’s voting turnout in the first parliamentary elections in which they were allowed to vote. 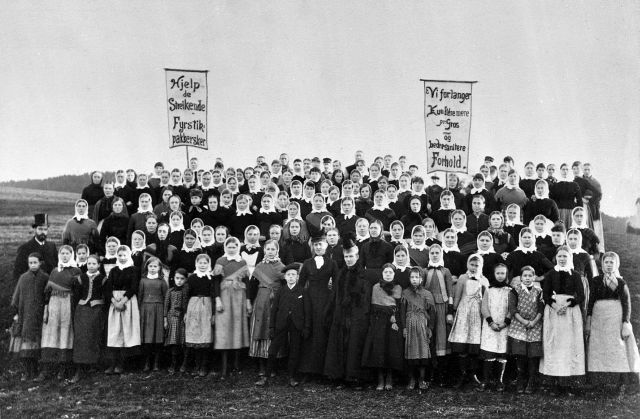 March 8 is the International Women’s Day which is celebrated all over the world.

The Voting Rights Committee, Kilden Theater and concert hall in Kristiansand and Norwegian Broadcasting’s gift to Norway is a grand opening gala.

On the basis of the parliamentary decisions in 1913, The Voting Rights Committee invites everyone to participate in the celebration on June 11 in front of the Parliament in Oslo. There will be live entertainment and birthday cake for everyone (!). The celebration takes place all over the country.

“The right to vote is not worth anything if you do not use it”. The Voting Rights Committee urges every Norwegian to use their right to vote during the General elections in 2013.

The Voting Rights Committee aims to highlight some of the major international issues of women’s rights and political participation. The committee cooperates with the Peace Research Institute in Oslo (PRIO) and the Forum for Women and Development (FOKUS). The conference is in collaboration with the Ministry of Foreign Affairs (MFA) and the Ministry of Children, Equality and Social Inclusion (BLD).

The conference will gather political leaders and human rights activists, including women, from all over the world. The goal is to put women’s political rights and international gender equality on the agenda. The event will have a strong international profile.

Like Loading...
‹ Perfect Sunday Pie With Chicken, Leek and Mushrooms
Norwegians Eat Far Too Much Salt and Too Little Fish ›