On January 23rd 1944, Norway’s most famous artist passed away. Today, the 150th anniversary of Edvard Munch’s birth begins, and throughout 2013 he will be honored with exhibitions all over the world. 600 guests are invited to attend the “Munch 150” gala opening at Oslo City Hall.

Among the prominent guests is Royal Patron of “Munch 150” King Harald who will officially open the commemoration. Oslo Mayor Fabian Stang, Minister of Culture Hadja Tajik, Director of the National Museum Audun Eckhoff and Director of the Munch Museum Stein Olav Henrichsen will also be present.

-We want to celebrate Norway’s biggest artist, and to disseminate knowledge, curiosity and enthusiasm for Munch’s life and art both locally, nationally and internationally, director of the Munch Museum said in an interview.

The highlight of the celebration is the anniversary exhibition “Munch 150” from June 2nd to October 13th. It is the most comprehensive Munch exhibition ever, with over 250 works on display at the National Gallery and the Munch Museum in Oslo.

– “Munch 150” provides a unique opportunity to see the big picture within Munch’s art. We hope that the anniversary and the exhibition will create public awareness of Edvard Munch’s importance in the international cultural heritage, director of the National Museum Audun Eckhoff said in an interview.

Eight municipalities with a special connection to Edvard Munch and his family are especially highlighted during 2013. These are: Oslo, Horten, Kragerø, Vestby, Moss, Løten, Vågå and Fredrikstad.

One of Munch’s masterpieces, “Self Portrait with Cigarette,” was sent on a national tour on his 149-year anniversary, 12.12.2012. The exhibition is called “Munch on Tour” and appears on seven different locations in Norway: Longyearbyen, Karasjok, Tromsø, Fredrikstad, Røros, Førde and Notodden.

The anniversary is organized by the National Museum of Art, Architecture and Design and the Munch Museum in collaboration with private and public sectors. 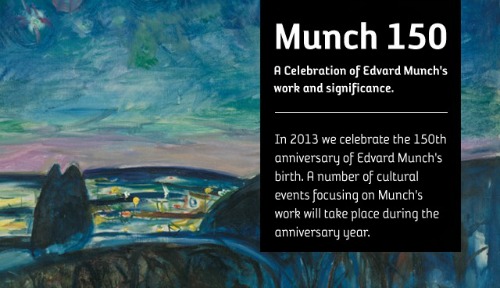