Moskstraumen Maelstrom – Where Captain Nemo and the Nautilus Disappeared

Moskstraumen Maelstrom is one of the world’s strongest tidal currents. It is located between the Lofoten Point and the island Værøy southwest of the main chain of the Lofoten Islands. Moskstraumen is about 4 kilometers across and 40 to 60 meters deep, and is considerably shallower than the surrounding sea.

The tide fills up the Vestfjord (inside Moskstraumen) twice a lunar day (about 24 hours and 50 minutes), and a strong sea level gradient occur. This sea level gradient drives the current around Lofotodden and the other strong tidal currents in the narrow sounds between the Lofoten Islands further east. The current is said to run with speed up to 10-12 knots, but there are no current records available that can be used for estimates of current extremes.

Moskstraumen was described in the 13th century in the Old Norse poems Edda and remained an attractive subject for painters and writers, including Edgar Allan Poe, Walter Moers and Jules Verne. The Swedish bishop Olaus Magnus included Moskstraumen into his detailed report on the Nordic countries and their map, Carta Marina (1539). He attributed the whirlpool to divine forces and mentioned that it was much stronger than the previously known Sicilian whirlpool Charybdis. Most other writers of the time believed that Moskstraumen played an important role in the ocean circulation, but, given a large amount of tales and lack of scientific observations, grossly overestimated the size and power of the phenomenon.

Moskstraum, referred to simply as “the Maelstrom”, was the inspiration for Edgar Allan Poe’s short story “A Descent into the Maelström” (1841), which brought the term maelstrom, meaning strong whirlpool, into the English language. The term originates from the combination of Dutch words malen (to grind) and stroom (stream).

Moskstraumen also features in the climax of Jules Verne’s “Twenty Thousand Leagues Under the Sea” and is mentioned by Captain Ahab in Herman Melville’s “Moby-Dick”. A likely source of information on Moskstraumen for those writers was a fictional description of Moskstraumen by Jonas Danilssønn Ramus from 1715 which was translated into English and partly included into the 1823 edition of Encyclopædia Britannica. Poe quoted Jonas Ramus and Encyclopaedia Britannica in his tale. 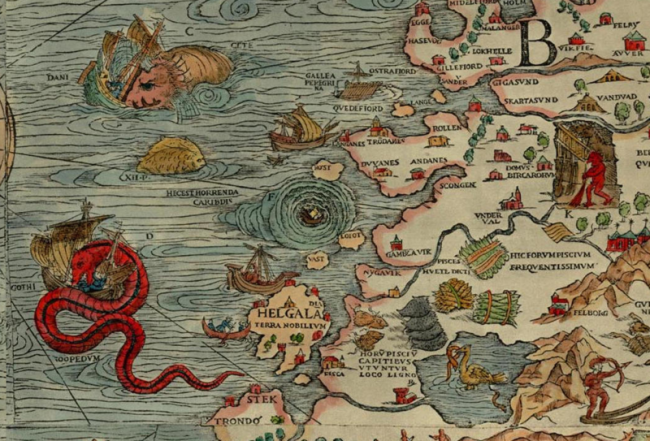 The maelstrom off Norway, as illustrated by Olaus Magnus on the Carta Marina, 1539

One of the first scientific descriptions of Moskstraumen was presented by the Norwegian priest and national poet Petter Dass in his poem “Nordlands Trompet” which included a versified topographical description of northern Norway. There he clearly related the whirlpool with tides by noting that it was the strongest at full and new Moon and the weakest at half-Moon. He also noted that since the large fjords of the Moskenesøya had to be filled and emptied within 6 hours, the related water flow should create strong currents. Dass’ novel was however not translated into English and remained unknown in Europe.