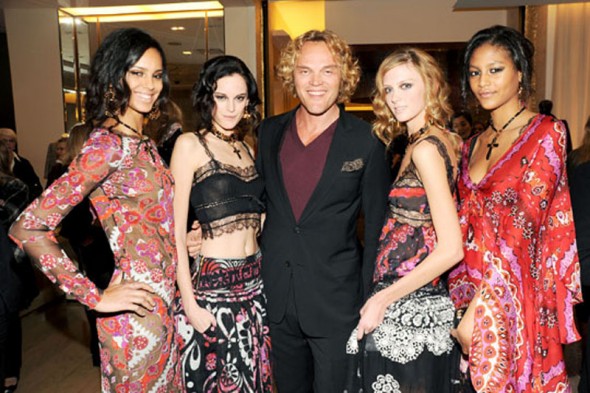 Since 2008, Norwegian-born Peter Dundas has worked as the creative director for the Italian fashion house Pucci. Fashion experts claim that he has ‘injected a darker, youthful, sophisticated edge into the brand, which goes well with the House of Pucci’s jet-set retro glamour’.

Dundas was born in Norway but moved to Indiana at the age of 14. He studied at Parsons The New School for Design in New York, and from 1992 to 2000, he worked as a design assistant for Jean Paul Gaultier. He continued his fashion career at Christian Lacroix the following two years.

In 2002, Dundas moved from Paris to Florence to become the chief designer at Roberto Cavalli, where he stayed for five years. “The greatness of the city [Florence], which unfolds in the morning hours, is humbling and challenges me to make my mark, but it also provokes me, and permits a certain naughty, punk side of me to unfold”, Dundas said in an interview with Vouge Magazine.

In 2005, he became creative director at Emanuel Ungaro, a tenure that lasted until 2007.

Dundas became the artistic director of Emilio Pucci in October 2008. A Pucci spokesperson said in a statement: “Peter Dundas, who is one of the most promising designers of his generation, possesses a creative talent and personality that fit with Pucci’s spirit and with its colorful and modern identity.”

Emilio Pucci was one of the first designers to stretch the boundaries of fashion, lending his creative talent to a variety of lifestyle projects. Their feminine and free-flowing body-conscious shapes translated seamlessly into weightless silk jersey dresses, resort-style sportswear and glorious evening gowns which were must-haves for the jet-set crowd.

Dundas claimed he is not intellectual as a designer rather he is influenced by spontaneity and instinct. His biggest muses in fashion are rock stars’ girlfriends such as Anita Pallenberg and Marianne Faithfull.

His fondness for short dresses comes from a love of a particular part of the female body: “There’s something about a very short dress. I love legs, I love, love them”, Dundas said in an interview.

Several celebrities love his fashion design. In May 2010, Sarah Jessica Parker wore his design for Pucci—a deep teal dress with gold appliqué detailing and airy printed skirt—on the movie posters for Sex and the City 2.