Norwegian Residential Environments: ‘A Norwegian Home in a New Age – 1905’

Earlier, ThorNews introduced the collection ‘Norwegian Residential Environments’ located at the Norwegian Folk Museum in Oslo. The Folk Museum is the largest museum of cultural history in Norway. It is the only museum in the country with a nationwide collection from the 1500s and up to the present. Their large collection of urban and rural artifacts presents cultural traditions in a historical perspective.

In 1999, the apartment building of Wessel Street no 15 downtown Oslo was demolished and rebuilt in its entirety at the Norwegian Folk Museum at Bygdøy. It was offered by OBOS – Oslo Cooperative Housing Cooperation. Between 2001 and 2005 the building was renovated and decorated through the museum’s own vision: Reconstructed apartments from previous residents since 1879.

In our previous residential environments article, the topic was ‘A Doll’s House – 1879’. The following apartment ‘takes place’ in an important era in Norwegian history. Since the 1500s, Norway had been under both Denmark and Sweden. In 1814, during the Napoleonic War, Denmark had to cede Norway to Sweden. The period up to 1905 was characterized by the Norwegian struggle for independence. Towards the end of the union, the Norwegian discontent grew larger. Conservatives wanted to continue the union if there was full equality between the states, while the Left party demanded full independence. The Left party won with 368 208 votes against 184. 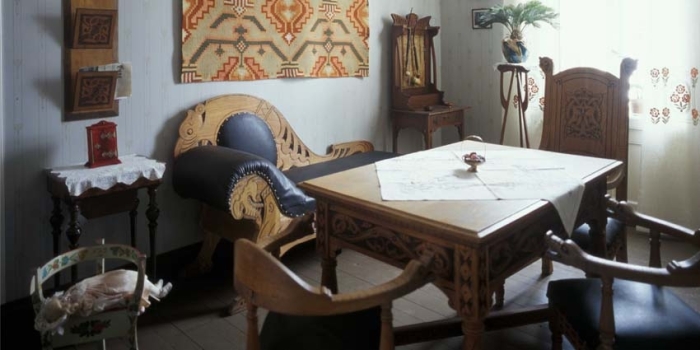 The residential apartment ‘A Norwegian Home in a New Age – 1905’ is described by the Norwegian Folk Museum as follows:

‘A Norwegian Home in a New Age – 1905’ is furnished to show the new home ideals introduced by the Swedish author Ellen Key in her book ‘Beauty for all’ (Skönhet for alla) published in 1899 and translated to Norwegian in 1903 with the tittle ‘Beautify your Home’ (Gjer heimen din fager). These home ideals incorporated a rhetoric pointing forward to the functionalism of the 20s and 30s, and an interior style combining elements of art nouveau with traditional crafts and dragon style. Key expressions are ‘light and airy’, functional, simple and plain, but also beautiful.

The narrative is fictional. We have invented a young teacher’s family – a married couple with a small child and a maid. They are part of a counter-culture incorporatingnon-socialist radicalism, beliefs in national independence, ‘Landsmål’ – the New Norwegian language and interest in folk costumes, folk dance and folk songs.

The furniture in the dining room is jugend/art noveau. The drawing room has furniture and a lamp in dragon style and a traditional woven tapestry on the wall.